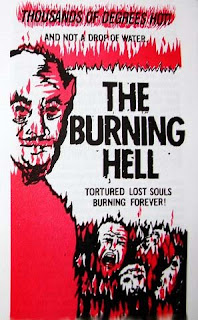 Throughout the 40s and 50s, director Ron Ormond (born Vittorio Di Naro) was your typical low-rent director of dubious talent who wrote, produced and/or directed dozens of forgettable low-budget B westerns starring the likes of whip-wielder Lash La Rue and James Ellison and Russell Hayden (of Hopalong Cassidy fame) for his company Western Adventures Productions. He also had worked as a stage magician, wrote books on new age medicine and psychic surgery, produced a roller derby TV show and would eventually branch out and make his very first exploitation movie, the much-hated MESA OF LOST WOMEN, in 1952, before caving in to the sex-and-violence drive-in demands of the 60s with such efforts as PLEASE DON'T TOUCH ME! (1963), WHITE LIGHTNIN' ROAD (1967) and THE MONSTER AND THE STRIPPER (1968). Afterward, Ormond survived a plane crash, became "born again," opened his own church and started churning out cheap, technically inept and borderline offensive "Christ-sploitation" efforts such as this one, which mixed preaching and trite moralizing with violence and gore. Compromise! Many of his films, whether in the name of the almighty God or the almighty dollar, were so badly made and horribly acted they've gone on to enjoy a healthy cult following.
.
THE BURNING HELL, the second in the Ormond Jesus series, was also the second collaboration between Ron and a Southern Baptist minister by the name of Estus W. Pirkle, who had himself written several books. And it's basically one long, boring, monotonous sermon with Pirkle preaching about how going to hell sucks ("Hell IS real and hot and terrible!") to his blank-eyed, nodding flock intercut with hilariously awful biblical reenactments with rednecks running around in the desert with sheets draped over their heads and scenes taking place in both heaven (ahhh!) and hell (argh!!!!). To drive home the point, a couple of young men - Tim (the director's son - Tim Ormond) and Ken (Chuck Howard) - who go to one of those "lenient" churches that doesn't try to scare their congregations meet Estus and shrugs off his warnings. They feel that just believing in Jesus will win them heaven's key. Wrong! Ken is decapitated in a motorcycle crash and ends up going to hell, while Tim eventually sees the light after attending Estus' church.
.
When this was released, areas in the Southern USA were apparently plastered with threatening fliers ("20,000 degrees Fahrenheit and not a drop of water!"), the film was actually dubbed into both Spanish and Portuguese for distribution in South America (!) and it was frequently booked for screenings in churches to horrify children into obedience. I've read many comments from people who claim the film did indeed scare them silly when they were young and left a lasting impression. And it's not hard to imagine why. Other than the sight of a bloody motorcycle crash, an impalement and other bloody sights, we get frequent visions of hell where facially-disfigured victims dressed in rags scream, cry and wail in eternal torment while engulfed in flames and weirdly painted-up demons laugh with sadistic glee. If that's not bad enough, you're not only on fire, but your body also becomes infested with worms and maggots that slowly eat away at your flesh! Heaven's more like a big country club where you get to stroll around by a lake in immaculate white robes and fraternize with friends and family. According to this film, you also get to have cookouts with your family and even get to watch your favorite television shows! Also according to this film, three-thousand people go to hell every single hour. I guess that's referring to all of us who aren't Southern Baptist.
.
Every once in awhile we get a much-needed break from Estus' neverending sermon to hear some insight from a few guys we should really take seriously because they're referred to as "doctors." See kids, organized religion's not just for uneducated hillbillies anymore! And the biblical reenactments themselves (combined with the amusingly transparent scare tactics) are great compensation for having to sit through the rest of this. Thanks to the terrible acting, the twangy Southern accents and the weird dubbing, they're absolute laugh riots. The voice given to cotton-swab-bearded Abraham alone makes this well worth sitting through.
.
For more of the same, make sure to check out the following Ormond classics...
.
IF FOOTMEN TIRE YOU, WHAT WILL HORSES DO? (1971); a hysterical Christian 'red scare' epic about what might happen if we Americans don't stop our sinning ways and turn to God... Communists will take over our fine country! It's based on "the teachings" of Pirkle. THE GRIM REAPER (1976) involves a God-fearin' Southern lass who tries to save the souls of her hard-drinkin' husband and race car drivin' son before their souls are sent to hell for all eternity. It was produced by the National Organization of Baptist Churches in Nashville, Tennessee, was again shown regularly in Southern churches (poor kids!) and was billed “a hell fire and damnation film!” THE BELIEVER'S HEAVEN (1977) is a companion piece to THE BURNING HELL and is an account of what heaven is like according to the bible (and Pirkle). And finally, 39 STRIPES (1979) was a bio of Ed Martin, a former chain gang convict turned Christian who created the HopeAglow Ministries.
.
★ SBIG
Posted by The Bloody Pit of Horror at 7:07 AM

I just watched this tedious, hour-long sermon and have to disagree. The Hell scenes along with the biblical Middle Eastern scenes are laughable, but they won't make you laugh. Yes, it's amusing that these bronze-age Israelites are speaking with Southern accents, but for the most part this movie is like sitting and listening to a street corner preacher for an hour.


I SAW THIS FILM NOT TOO LONG AFTER I WAS PERSONALLY SAVED, CONVERTED, BORN-AGAIN & SPIRITUALLY SAVED FROM HELL, HELL-FIRE, THE LAKE OF FIRE & OUT OF SATANIC~VATICANISM &-OR ROMAN-"CATHOLICISM" IN THE FALL-/-WINTER OF 1975. LOOK, FOR A FILM RELEASED IN 1974, AT THE TIME IT WAS A WORK OF GREAT MODERN, CURRENT & CONTEMPORARY SOUND EFFECTS, CINEMATOGRAPHIC SPECIAL-EFFECTS & ACTING--AS HOLLYWOOD ALSO RELEASED IN THE EARLY 1970s MANY MOVIES WHICH WE WOULD TODAY CONSIDER "CORNY &-OR CORNBALL"--AS IN FILMS LIKE "IT'S ALIVE", "BLACKULA" & EVEN X-RATED CARTOON PORNOGRAPHIC MOVIES LIKE "THE NINE LIVES OF FRITZ THE CAT" OR XXX-MOVIES LIKE "A CLOCKWORK ORANGE" & ETC. ETC. ETC. !
-
I HIGHLY RECOMMEND "THE BURNING HELL" TO THOSE WHO SERIOUSLY DESIRE THE TRUTH ON HELL'S-/-HELL-FIRES' EXISTENCE, REALITY & VERITY; BOTH BIBLICALLY, HISTORICALLY & PERSONALLY.

I SAW THIS FILM NOT TOO LONG AFTER I WAS PERSONALLY SAVED, CONVERTED, BORN-AGAIN & SPIRITUALLY SAVED FROM HELL, HELL-FIRE, THE LAKE OF FIRE & OUT OF SATANIC~VATICANISM &-OR ROMAN-"CATHOLICISM" IN THE FALL-/-WINTER OF 1975. LOOK, FOR A FILM RELEASED IN 1974, AT THE TIME IT WAS A WORK OF GREAT MODERN, CURRENT & CONTEMPORARY SOUND EFFECTS, CINEMATOGRAPHIC SPECIAL-EFFECTS & ACTING--AS HOLLYWOOD ALSO RELEASED IN THE EARLY 1970s MANY MOVIES WHICH WE WOULD TODAY CONSIDER "CORNY &-OR CORNBALL"--AS IN FILMS LIKE "IT'S ALIVE", "BLACKULA" & EVEN X-RATED CARTOON PORNOGRAPHIC MOVIES LIKE "THE NINE LIVES OF FRITZ THE CAT" OR XXX-MOVIES LIKE "A CLOCKWORK ORANGE" & ETC. ETC. ETC. !
-
I HIGHLY RECOMMEND "THE BURNING HELL" TO THOSE WHO SERIOUSLY DESIRE THE TRUTH ON HELL'S-/-HELL-FIRES' EXISTENCE, REALITY & VERITY; BOTH BIBLICALLY, HISTORICALLY & PERSONALLY.

Whatever floats your boat, man!