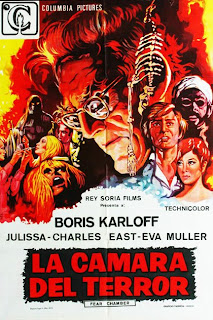 ...aka: Cámara del terror, La
...aka: Chamber of Fear
...aka: Torture Chamber, The
...aka: Torture Zone
Directed by:
Jack Hill
Juan Ibáñez
Scientists Corinne (Julissa) and Mark (Carlos East) are exploring underneath a volcano with their "detector" when they stumble upon a strange, living rock. Meanwhile, a woman named Luisa strips down to her bra and panties and goes to bed. A dwarf (Santanón) visits her while she sleeps and when she wakes up the next morning, she finds herself in a bizarre, colorfully-lit, cobweb-strewn "fear chamber" full of unusual and creepy stuff. The dwarf is there. And so is some guy wearing white gloves, a white turban and sunglasses who threatens her with a lizard, and a sexy woman in leather who slaps her around. Skeletons, skulls and candles decorate the walls, spiders and snakes are all over the place and a pool of glowing red water has eels in it and some huge tentacle! The girl screams and screams and screams some more; finally making it to a torture room where a robed man (played by Boris Karloff) - demands "Bring on the sinner!" Another female is dragged into the room by hooded henchmen, is tied over a fire pit and then stabbed to death. Next up is Luisa, who's snatched up, brought to the table and passes out... and then thing start getting stranger than they already were.
Karloff's character enters through another door and finds himself in some kind of futuristic, brightly-lit clinic where it's revealed he's not actually a cult member, but a scientist. Dr. Carl Mandel (Boris), his evil, voyeuristic lesbian assistant Helga (Isela Vega), Corinne (his daughter), Mark (her boyfriend), Roland (a lobotomized mental defective with a diamond fetish played by Yerye Beirute) and some others are caring for the rock they'd found earlier, which apparently survives by eating special hormones produced by females when they're frightened! The scientists ponder whether its ethical or not to lure women there under false pretenses (they also run a bogus employment agency!) and then extract their blood while they're passed out, and are also having problems with that turbaned guy, who's been fooling around with the unconscious victims. Dr. Mandel ends up getting electrocuted and the experiments are put on hold, but Roland befriends and bonds with the rock monster and communicates with it telepathically (!), and he and Helga plot to continue on in the experiments against Mandel's wishes. The rock soon becomes powerful enough to take live victims whole, and it turns the sexy young women it gets ahold of (including a stripper) into withered old hags.
It's pretty awful, confusing, weird and horribly dubbed, but somewhat entertaining in a slapdash Z movie kind of way... at least for awhile. My interest level seemed to drop off about 30 minutes in once the bizarro plot was fully established and the film then really had nowhere else to go, though there's still the occasional laugh (especially Roland's "I'm gonna be da kang of dee world!" rants at the end). The torture chamber sets are actually pretty cool, though!
.
Notable mainly for containing Karloff's last actual screen appearance. The actor spends most of his time in the first half sitting at a desk, and most of his time in the second half lying in a bed. His footage was shot in Santa Monica by director Hill in May of 1968 (the film itself wasn't released until 1972), which was then combined with what Ibáñez shot in Mexico. The same exact technique was used for three other last minute Karloff features (all of which are varying degrees of bad); the haunted house movie DANCE OF DEATH (also with Julissa), the voodoo movie SNAKE PEOPLE (with Julissa, East and Santanón) and the alien movie THE SINISTER INVASION (with Beirute).
★1/2
Posted by The Bloody Pit of Horror at 9:54 AM

Being a big Karloff fan I'm familair with his last "Mexican movies". Fear Chamber is crazy but slightly entertaining. It's better than The Snake People which uses a terrible double and fake voice near the end and at the climax!

Yeah I've seen 3 out of 4. I just have Incredible/Sinister Invasion left to go. I think the worst one of the three I've seen so far is Dance of Death/House of Evil, but all three of them pretty much sucked. It's a good thing Karloff was able to do Targets the same year!