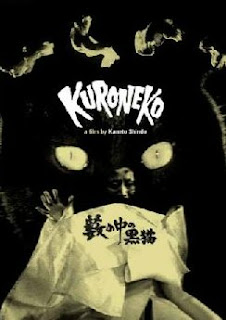 Shindô's terrific companion piece to his highly-regarded ONIBABA (1964) is nearly as good. A group of samurai casually invade a farm house where two women live. They steal their food and water, gang rape them, murder them and then burn down their home. The victims - elder Yone (the excellent Nobuko Otowa, returning from ONIBABA) and her daughter-in-law Shige (Kiwako Taichi) - have made a pact with an evil God; they can return to human form in exchange for killing and drinking the blood of every samurai they happen to come across. Late at night, at Rajomon Gate - their village's city square - Shige waits patiently for any chivalrous samurai passing through the area and then asks if they'll accompany her home. The men are then led down a long, dark path, invited inside, given enough sake to get them drunk, are tempted with sex and then have their throats chewed out by the stealthy, cat-like seductresses. Meanwhile, Gintoki (Kichiemon Nakamura), Yone's son and Shige's husband, who was drafted to go to war three years earlier, has returned home only to find the charred remnants of his former home and is family missing. Now a war hero and high ranking samurai himself after slaying a powerful barbarian, Gintoki is hired by the village's prejudicial police chief Raiko (Kei Sato, also from ONIBABA) to kill the "monster" responsible for the recent series of samurai slayings.
While patrolling Rajomon Gate one evening, Gintoki comes across a veiled Shige, who lures him back to her home. Though Shige and Yone try to hide their identities at first (a pact they made with the evil God states they cannot reveal who they are or why they are killing samurai or else face spending eternity in hell), it's all too obvious to Gintoki that's he finally located his missing family. Shige risks all by starting a passionate affair with her former husband instead of killing him, while Gintoki is given an ultimatum from Raiko to either kill the women or be killed himself.
A lot of the themes (revenge, ghosts, the black cat, loyalty to family, class status...) contained here were very common themes in Japanese cinema during this time. How the film deconstructs the myth of the samurai; stripping down a profession once blindly regarded as strictly "noble" and "respectable" and turning into something more shaded, was also something common. Just like those in any high-ranking position, power is abused and many samurai used their status as an excuse to terrorize and commit crimes against those their arrogance led them to believe were lesser or expendable (namely farmers, peasants and women). In regard to these themes the film is somewhat familiar, but this is so well-made it doesn't really matter. It's very well acted by all four of the principals and superbly photographed in b/w by Kiyomi Kuromi (who won a major Japanese film award for his work here; as did Otowa). The lighting is highly stylized (sometimes images are even spot-lit to stand out) and Takashi Marumo's art direction is also exceptional (and clever), particularly inside the ladies' new home, which is done with a symmetrical/vertical theme that nearly blends the interiors with the thick bamboo fields located right outside. The characters are given enough conflicts of conscience to keep the emotional content compelling, and the horror/supernatural elements are eerie; sometimes jarring even.
.
So if you haven't seen this or ONIBABA, plan a double-feature as soon as you can to check out two of the decade's very best films. Amazingly, the director is still busy writing and directing to this very day... at the age of 97!
.
★★★1/2
Posted by The Bloody Pit of Horror at 5:19 AM

Yeah, it was great! I think the Japanese horror output of the 50s and 60s has been sorely overlooked because many of these movies are (or were) difficult to find. I've seen quite a few from these decades that SHOULD be more famous than what they are.

There are definitely a lot of gems from this time that few people know about. This is one of many.