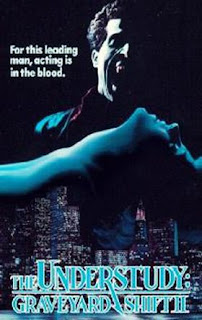 Directed by:
Gerard Ciccoritti
Silvio Oliviero (who goes by the name Michael A. Miranda these days) returns as the same vampire from the first film in this confused and unfocused sequel. Using an alias, he gets the lead role in a low-budget vampire movie ("Blood Lover"), but the cast and crew have no idea that he is, in reality, a vampire. Numerous characters feel his toothy wrath and join the ranks of bloodthirsty night stalkers including lovely leading lady Camilla (Wendy Gazelle). It's a clever idea (actually predating Oscar-nominated SHADOW OF THE VAMPIRE - which also involves a "real" vampire cast as such in a movie set unbeknownst to the filmmakers - by over ten years) and the direction is stylish at times, but the end result is somewhat hollow. It's hard to follow and lacks the emotional core the much-better original film had.
.
Also in the cast are Mark Soper (the star of the 1982 slasher BLOOD RAGE), Tim Kelleher, Lesley Kelly (also in the first film) as the director, Paul Amato, Agi Gallus (also in the director's PSYCHO GIRLS, along with Ciccoritti) and Dean McDermott, who'd go on to become a reality TV star and tabloid fixture after having an affair with untalented, still-married Tori Spelling (he was also married at the time).
Score: 4 out of 10
Posted by The Bloody Pit of Horror at 4:28 PM