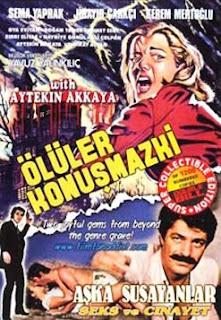 ...aka: Thirsty for Love, Sex and Murder

Directed by:
Mehmet Aslan
Sergio Martino's THE STRANGE VICE OF MRS. WARDH (1970) is a pretty good film, but who would have guessed it would be remade just one year after it was released... almost scene-for-scene... in Turkey! Well, I wouldn't have believed it until I found a review online. Then I knew I just had to see it for myself. Now that I have, I can say this film is indeed a complete and utter rip-off of Martino's film and they do absolutely nothing to disguise that fact! The plot, twists, characters, music score and scenes play out just as they do in MRS. WARDH, except here it's compacted down (none-too-well) to a 57-minute run time, has worse acting, much lower production values, an altered ending and a few sleazy little bits added here and there. It also tries to ape the giallo style and (surprise, surprise) actually does so fairly well at times, with interesting camera angles, some slick editing and certain shots blurring out, being stretched out and other simple but effective techniques "borrowed" from the source material. Is it worth watching? Sure. For fans of this stuff, it is. It's fairly entertaining, and there's enough violence and nudity, not to mention cheap laughs, to hold one's interest throughout. But at the end of the day it's nothing more than a lesser-quality rip-off of a better film that becomes a hilarious "WTF" nonsensical mess by the time the finale arrives.

Mine (Meral Zeren), a hot-to-trot young woman with huge fake eyelashes and a troubled past, is married to older, often-out-of-town business Metin (Nihat Ziyalan), but is led astray by her saucy friend Oya (Eva Bender). At a party where two women get in an irritating little scuttle and rip each others dresses off, Mine meets Yilmaz (Kadir Inanir) and the two hit it off. Meanwhile, a mustachioed "scarface" in a top-hat, black gloves, trench coat and sunglasses is slicing up ladies who incidentally happen to be nude or half-dressed at the time. He's first seen offering a lift to a hitchhiker and then proceeds to chase her out of the car and through the woods until he corners her. She then reveals she's a 17-year-old virgin who will be "ruined" if he rapes her so he decides to ruin her in another way by slashing her to death with a razor. Mine has frequent flashbacks to her sadistic former lover Tarik (Yildirim Gencer), which reveals she has both a submissive and masochistic side. It's also revealed her marriage is loveless and more of a convenient arrangement for the two parties involved. In fact, her husband had some kind of accident that took his, uh, manhood away. I guess that opens the door for a torrid affair with the handsome Yilmaz.

If you've seen MRS. WARDH, you know the rest of the story. Mine gets flowers with strange cards attached... Mine gets weird phone calls... Mine gets blackmailed by the killer, who wants her to meet him in a park and bring money, but her friend shows up in her place... Mine runs off with her new lover... Etc., etc. A few parts are altered here and there. The ending is the most noticeable change, as they try to pull off about five quick twists in the final three minutes and fail miserably at pulling it off! And just wait until you lay your eyes on one of the most ridiculous looking and badly choreographed fight scenes since the big beach brawl in HORROR OF PARTY BEACH. Instead of even attempting suspense, the killer here has a habit of suddenly just leaping from off-screen at victims, which is kind of amusing. The actors range from wooden to tolerable. Both the lead actress and lead actor look great, at least. There's also an obnoxious policeman who screams at people to try to startle information out of them (?!)

There are a few mildly bloody slashing scenes (with both a razor and a broken bottle) as well as a (sort-of) silly decapitated head. There's also a generous amount of female nudity, which also provides many of the laughs because of the silly lengths they go to get women naked. One of the funniest is when a random woman arrives home wearing a long coat and suddenly whips it off to reveal she's not wearing anything underneath before getting slashed in the shower. One of Oya's sexy little numbers consists of what looks like a curtain draped over her chest with her BA completely exposed at the back.

I'm sure a tiny little legal issue commonly called plagiarism has kept this film - as well as many other Turkish titles - from getting released anywhere outside its home country over the years, but this is now available on DVD with English subs through a Greek company called Onar Films. They have double-teamed this with another Turkish Terror called "Ölüler konusmaz ki" (1970; aka THE DEAD DON'T TALK), which involves a haunted house and was directed by Yavuz Yalinkiliç. I haven't seen that one yet, but it should be interesting enough.
★★
Posted by The Bloody Pit of Horror at 12:40 AM