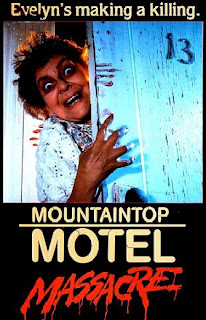 Directed by:
Jim McCullough, Jr.
I'm sure a lot of 80s horror freaks have seen this one based on the memorable tag line alone - "Please do not disturb Evelyn...she already is!" Anna Chappell stars as the elderly Evelyn, who's let out of a mental hospital and starts running the Mountaintop Motel, a scuzzy string of run-down shacks out in the sticks that would have me sleeping in the nearest ditch. She snaps again and, on a dark and stormy night, beings murdering people stranded at her hotel. Guests include a honeymooning couple, two reverends, a record executive and a pair of Barbara Mandrell clones who don't wear bras (as evidenced by a scene where both are caught out in the rain wearing flimsy white tops). Funny sounding cosmic music plays whenever Evelyn is up to something devious. She lurks around in underground catacombs spying on victims with her bugged-out eyes, hears her dead daughter's voice, sneaks snakes, roaches and rats into rooms and hacks people up with a sickle.
This isn't even in the same ballpark as the major movie it draws inspiration from - PSYCHO - but who's really expecting it to be? If you're more reasonable and have no expectations going in, it really isn't all that terrible. Shot on a very low budget in Louisiana, this has an effective desolate backwoods atmosphere and the sets are fairly good. There are a few good laughs (intended and otherwise), and some blood, and while the cast isn't exactly what I'd call professional, they are at least spirited about their respective roles. Larry Buchanan fans, if such a thing actually exists, will recognize Bill Thurman as an alcoholic reverend. Also in the cast are Virginia Loridans (also in the obscure VIDEO MURDERS), stunt man Gregg Brazzel, Amy Hill and James Bradford as the sheriff.
.
Not released until 1986.
★★
Posted by The Bloody Pit of Horror at 2:11 AM