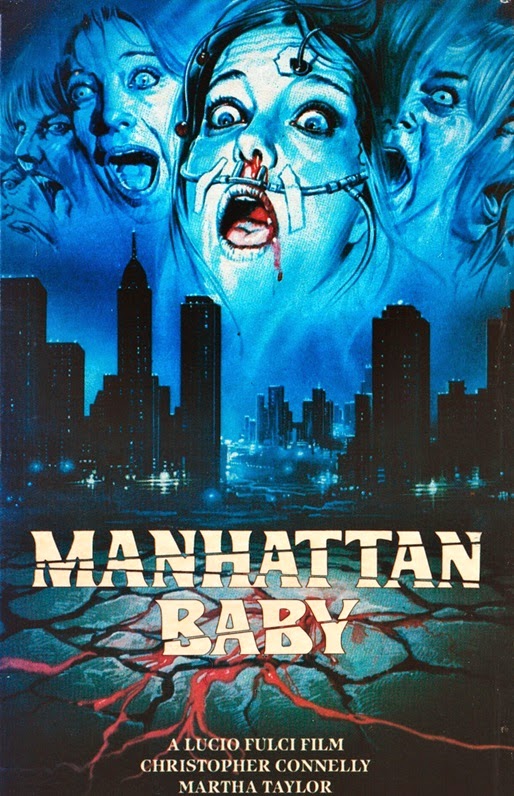 
Filmed as Il malocchio (or The Evil Eye), this is a minor, surprisingly restrained effort from Italian splatter-master Fulci. George Hacker (Christopher Connelly) is an American archaeologist in Egypt (where part of this was filmed) with his wife (Martha Taylor) and daughter in a creepy Exorcist / Omen inspired opening. After acquiring a cursed medallion, he's temporarily blinded by blue light and returns to New York to recover. There, his young daughter Susie (Brigitta Boccoli) becomes possessed by an evil spirit. Sand, cobras and scorpions show up in the apartment, characters are transported back to Egypt and, in the only gory part, stuffed birds come to life to peck a guy named (insert ROSEMARY'S BABY reference here) Adrian Mercato's face apart. Some of the camerawork and music is good, but the typically bad dubbing and choppy editing detract from the overall effect. Cinzia De Ponti, as an au pair named Jamie Lee (get it?), was a former Miss Italy. Also in the cast are Giovanni Frezza (the annoying little blonde kid from THE HOUSE BY THE CEMETERY) as the son, Cosimo Cinieri and Carlo De Mejo. Fulci also appears in a cameo as a doctor. Not likely to please most of the director's fans, this is watchable yet skippable.