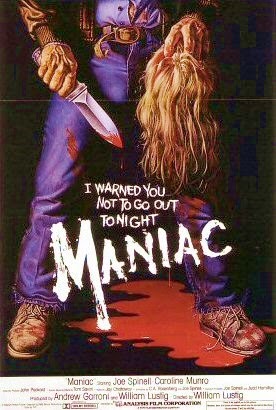 A claustrophobic, exploitative, graphic, scary and virtually plotless look at a serial killer. The late, great Joe Spinell stars as Frank Zito, a heavy-breathing, overweight, crater-faced psycho who cries out for his mother at night and suffers from constant nightmares. After killing two people on a beach, he picks up a hooker (Rita Montone), strangles her and then scalps her in a very sick (but effective) murder sequence. He takes her scalp back to his cluttered apartment and staples it onto the head of a mannequin, then heads back out for more of the same. Other women are killed and scalped and Tom Savini (who also did the exceptionally gory make-up effects) has his head blown off with a shotgun in a memorable gore scene. The best sequence is a lengthy chase-through-the-subway scene. A demented dream sequence has Spinell being attacked and ripped apart by all of the victims. Critics panned this movie for its slight story line, anonymous victims (most of whom aren't even given a name) and unrelenting violence, but a film venturing into the mind of a demented psychopath ain't supposed to be Disney. I can defend Maniac solely because it is entirely successful in what it sets out to do: horrify audience through graphic mayhem and a tense, claustrophobic atmosphere. The seediest areas of New York City (hovels, alleyways, subways, hotels-by-the-hours, etc.) are used to good effect. Spinell is excellent in the lead and the lovely Caroline Munro manages to light up the screen despite being handed a poorly underwritten role, though I seriously doubt someone as classy as her would even consider dating a grotesque weirdo like Spinell.

Lustig (who cameos as a hotel manager) had previously made the popular porno film The Violation of Justine starring Sharon Mitchell, who also appears here as a nurse. Adult film actress Gail Lawrence (aka Abigail Clayton) also has a role as a model / victim. A sequel (Maniac II: Mr. Robbie) was started by director Buddy Giovinazzo and star Spinell but never finished. Some scenes from it are available as extras on some of the DVD and VHS versions. The Last Horror Film (1982 aka Fanatic) was released overseas as Maniac 2: Love to Kill, but it's not really a sequel despite the re-teaming of Joe and Caroline (who also appeared together in the cheesy Italian science fiction film Starcrash in 1979).