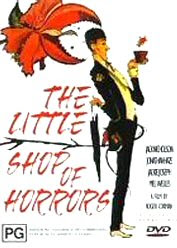 ...aka: Passionate People Eater, The

With all the attention paid to the Broadway musical and the popular remake, this has been pretty much forgotten. Unfortunate, since this is superior to both of them. It's a hilarious horror/black comedy shot in "two and a half days" by legendary cult icon and king of stretching the mighty dollar, Roger Corman. Seymour Krelboin (Jonathan Haze), a nerdy flower shop owner, discovers a bloodthirsty plant that he nicknames Audrey II after the object of his affection (played with airy charm by Jackie Joseph). The plant helps Seymour secure a job and impress the girl, but it also requires human blood to grow and survive. There are two main differences between this and the later derivations that followed. 1.) No musical numbers. Even though I like some of the songs from the musical, they certainly wouldn't really fit the poverty row, slapdash feel of this one... and... 2.) Most of the victims are killed in absurd accidents instead of being murdered and/or tricked into sticking their head in the plant's mouth. For instance, at one point Seymour is frustrated, throws a rock in the air and it happens to hit someone on the head. Some other scenes seem to be parodying what would be commonly seen on TV at the time; namely police dramas ("This is Sgt. Joe Fink...") and family shows (hence, Seymour's hilariously overbearing mother).

Mel Welles plays the cranky owner of the shop, Jack Nicholson has his first standout role as the notorious masochist Wilbur Force, who gets turned on by extreme dental pain and Dick Miller shows up as a strange flower shop groupie who likes to eat flowers. Scriptwriter Charles B. Griffith (who has several different cameos and also provides the voice of Audrey II) later sued to makers of the 1986 musical version for not even crediting him with the original idea. Not surprisingly, he won.