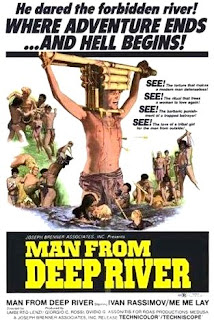 
1970 saw the release of Elliot Silverstein's A Man Called Horse, a western set in 1825 detailing British aristocrat John Morgan's (Richard Harris) capture by, and eventual integration into, a tribe of Sioux Indians. The film quickly gained notoriety thanks to a lengthy, gruesome "Sun Vow ritual" scene where John is strung up in a tree by ropes through his flesh in order to prove his worth. It was hugely successful; eventually spawning the sequels The Return of a Man Called Horse (1976) and Triumphs of a Man Called Horse (1983), both of which also starred Harris. As with most lucrative films, others quickly jumped at the chance to emulate its success. Producers Ovidio G. Assonitis and Giorgio Carlo Rossi got in contact with director Umberto Lenzi about directing a cash-in, based on an idea from erotica novelist Emmanuelle Arsan ("Emmanuelle") of all people, relocating the same basic story to the jungle. Instead of Native Americans, there would be Asian native tribes and, instead of one gruesome key set piece, there would be numerous. Italian actor Ivan Rassimov and Burmese / British actress Me Me Lai landed the lead roles and they, along with a small crew, traveled to Thailand and Burma for a difficult 4 month shoot.


Despite copying another film rather closely itself, Man from Deep River ended up being just as influential in its own way. It established and set down the groundwork for later cannibal / jungle shockers to come. You know: White people venture into the jungle. White people are captured by a primitive tribe. White people are tortured and killed by the tribe. It also included scenes of real animals being slaughtered, which would also be included in most of the later films to up the shock factor. Among the titles Man influenced are MOUNTAIN OF THE CANNIBAL GOD (1978; starring Ursula Andress and Stacy Keach), Ruggero Deodato's infamous CANNIBAL HOLOCAUST (1980) and two more from Lenzi himself: EATEN ALIVE (1980; which also featured Rassimov, Lai and recycled much footage from others in this genre) and the notorious CANNIBAL FEROX (1981). Interestingly, Man itself only contains one brief scene of cannibalism.

American photographer John Bradley (Rassimov) is on a sight-seeing trip in Bangkok when a man in a bar pulls a switchblade on him. During the scuffle, John accidentally stabs him, runs off and then gets on a train taking him far away from the big city. He hires a young guide - Chuan (Prapas Chindang) - and the two of them end up in a small village, where they charter a boat to head out deep into the jungle so John can take photographs. Before leaving, John pays off a man to keep quiet in case the authorities should show up there looking for him. That turns out to be a huge mistake. John falls asleep for a nap, wakes up to find his guide dead and is then captured in a net by tribesmen, tied to a pole and dragged off to a village. Tribal elder Lahuna (Ong Ard) believes he is a "fish-man" and puts him to work capturing turtles, but Lahuna's daughter Maraya (Me Me Lai) wants him as her personal slave, so father (sort of) complies with her wishes.

John is kept in a hut tied to pole when he isn't out doing labor at spear-point, but finds an ally in Taima (Prasitsak Singhara); an old woman who was raised by missionaries and knows English (unbeknownst to the rest of the tribe). Maraya falls in love with him and she makes him work naked, but scar-faced warrior Karen (Sulallewan Suxantat) is pissed at all of the attention Maraya bestows upon the blonde-haired visitor. When John tries to escape, he ends up in a duel-to-the-death with his rival and manages to kill him, which puts him up for a position as a warrior. He's tied up to a slowly-spinning contraption and natives use blow guns to shoot tiny arrows into his flesh. He's then tied up outside to bake in the sun for awhile. John manages to survive the ordeal and finds his rank among the tribe increasing, particularly after he saves a young boy's life.


As John gradually becomes accustomed to their ways, rituals and language, he realizes it may not be such a bad life after all, especially after Maraya picks him to be her husband and becomes pregnant with his child. A jealous witch doctor (Song Suanhud) in the tribe burns voodoo dolls in their likeness and soon Maraya becomes sick and goes blind. Another nearby tribe - The Kuru's - are blood-thirsty cannibals who like to swing by every so often to gang rape the women, dismember them and then consume their flesh.

Man from Deep River contains just what one may expect of it if they've seen other films in this sub-genre. Arms are hacked off, tongues are cut out, people are periodically speared, stabbed, sliced and tortured and lots of animals are actually killed; including many snakes (including a cobra during a fight with a mongoose), as well as pigs, goats, a monkey and other poor creatures. There's plenty of nudity, too. There's rape, several sex scenes and a woman whose husband is killed in an accident has to have a gang bang with all interested parties on top of her husband's ashes to allow her to marry again (a scene repeated in Lenzi's Eaten Alive).

Still, this movie feels different than the later films. For starters, Riccardo Pallottini's photography is bright, vivid and crystal clear, which is appropriate since this is more of a gory drama than an all-out horror film. Unlike in the later entries, the tribes people in this one aren't cruel, unreasonable savages bent on doing horrible things to whatever unlucky person stumbles upon their village. The ones here have personalities and are better defined as individuals with clear positions among the tribe. Some even wear colorful sarongs and regular clothes and their huts are even pretty nice and well-decorated. The village is set in a rather wide-open space near a river where a helicopter periodically flies overhead so the usual sense of dense, dark, impenetrable jungle and complete isolation from the 'civilized' world isn't quite established. 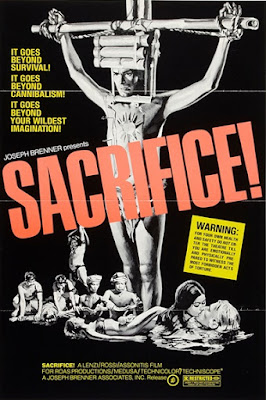 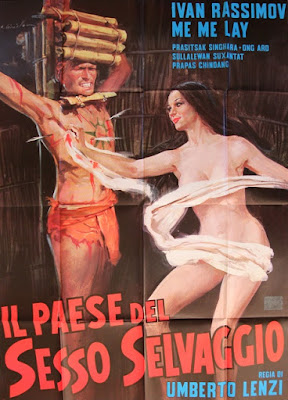 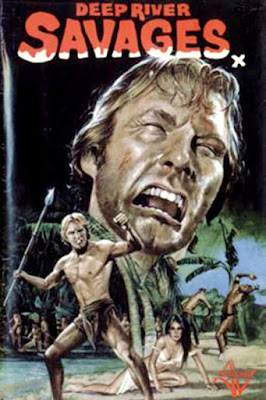 Approached on its own terms without certain expectations brought upon by what would come later, this is a pretty good film and is perhaps Lenzi's best all-around feature. It made a huge amount of money all over the world (including in America where it played under the title Sacrifice!), so Lenzi was approached about reuniting Rassimov and Lai for a follow-up. When the producers refused to meet his salary requirements, they instead hired Ruggero Deodato and the resulting film was JUNGLE HOLOCAUST (which was filmed in 1976 and hit U.S. theaters in 1978 under the title The Last Survivor).