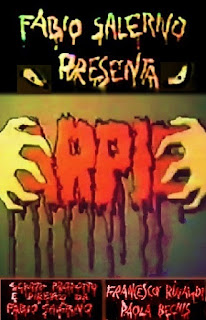 
Starting in the late 70s at age 14, Milanese director Fabio Salerno began making a series of short, no budget, underground horror films, which were all shot on Super 8, 16mm or video. By the end of the decade he'd made “dozens” (according to some sources) of these short films. Just a few of the titles include Spirit (1979), Cadaveri / “Corpses” (1982), Extra sensoria / “Extra Sensory” (1985), Vampiri / “Vampires” (1985), Mezzanotte / “Midnight” (1986), Arpie / “Harpies” (1987) and Oltretomba (Beyond) / “Afterlife (Beyond).” I'm not 100 percent sure if any of these were distributed at all outside of perhaps the occasional film festival screening but from all indications none of these films received a legitimate VHS release anywhere. The best that's currently available are bootleg copies from a video source, and even those are difficult to find.


In 1990, Salerno directed, wrote, produced, shot, edited and did the special effects for his first feature-length film: Notte profonda / “Deep Night;” which was made for less than 7 thousand U.S. dollars and featured songs from the “My Whip, Your Flesh” album from electronic / experimental band LIMBO. The film played at Fantafestival in 1991 and ended up winning the director a special award there, prompting Italian genre 'zines to start dubbing him the next Argento. Notte profonda seemed primed for a successful video release but the planned distributor ended up canceling the release after distributing just a few promo copies and the film ended up quickly and quietly fading away. As far as I know, it was never distributed outside of a few Italian video stores. I'm not sure if this setback was what finally did the director in, but it probably didn't help matters. He committed suicide in 1993 at the age of just 29 after having completed another short called L'altra dimensione / “The Other Dimension” (1993) and beginning work on a anthology called Cybergothic (1993), which was eventually completed by Federico Galanetto and Vittorio Cristiano. 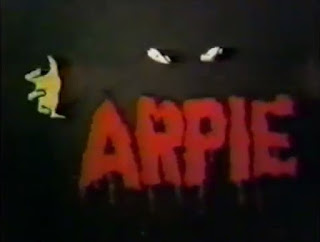 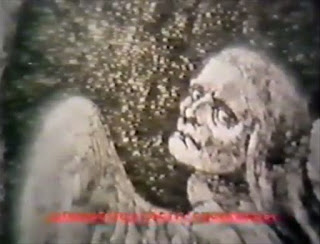 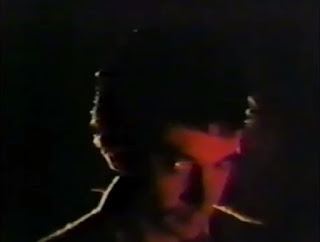 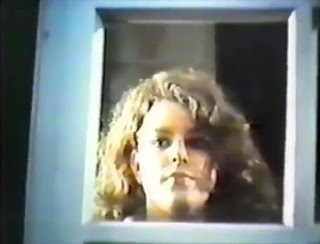 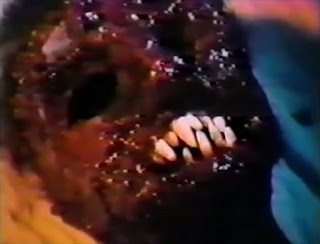 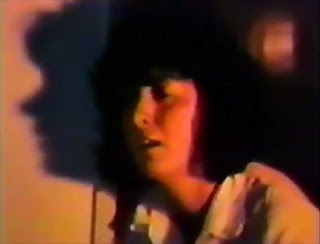 After a nonsensical prologue and a title screen briefly utilizing some animation, we meet Veronica Finzi (Paola Bechis), a young woman who's having a hard time keeping up with her university studies because of her full-time job working as a nurse at a hospital. The college dean calls her into his office and offers up a solution: If she'll start sleeping with him he'll help her out financially and forgive her for exceeding the amount of absences the school allows. Instead, she quits and storms out of his office. Elsewhere, a woman wakes up, rolls down her covers and is horrified to discover there's a decayed skull festering with maggots underneath. Someone with long blue fingernails then sneaks up behind her and stabs her in the head, causing blood to pour out of her eye socket. The dean shows up at Veronica's home later that evening and attempts to rape her, but she runs upstairs and locks herself in her bedroom. A hand then busts through the door and claws him to death. The following morning, pharmacy delivery boy Paolo (Paolo Coluzzi) shows up and is stabbed through the throat by a fanged female. 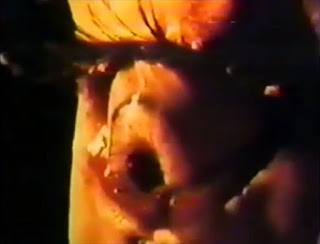 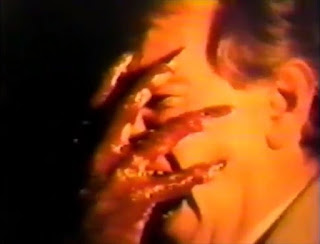 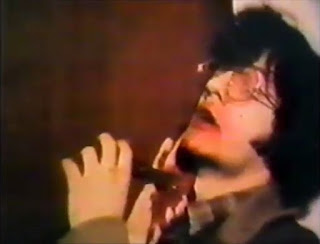 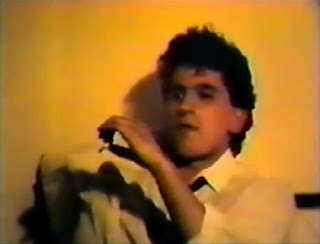 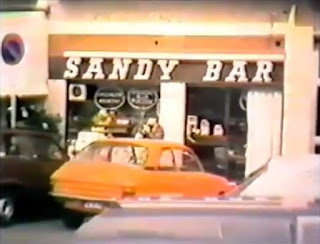 Veronica is, of course, the fanged, clawed monster (I guess the “arpie” of the title; semantics aside, she's pretty much just a demon) but her reign of terror is about to end when policeman Francesco Rinaldi (played by Francesco Rinaldi) and his partner show up at her home. The partner is killed but Francesco manages to shoot Veronica to death after discovering a bunch of smelly, decomposed body parts in her basement. The cop is traumatized by the event but his girlfriend Roberta (Roberta Schiarea) tries her best to help him forget. While walking around town, Francesco spots a woman who looks exactly like Veronica. He doesn't think anything of it until the mortuary calls to inform him that her body has disappeared. In passing, Roberta briefly mentions she has a female friend staying over, so if he hears footsteps coming from upstairs to just ignore them. Hmmm... 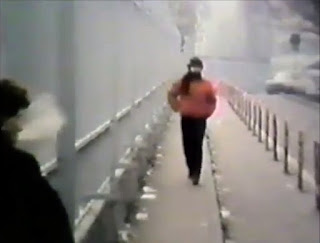 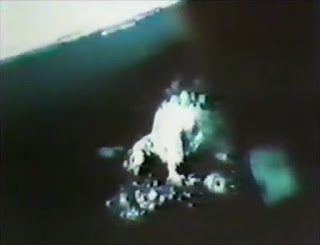 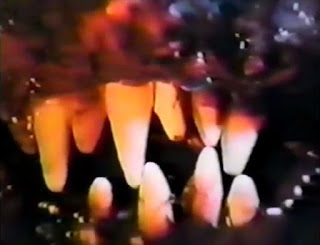 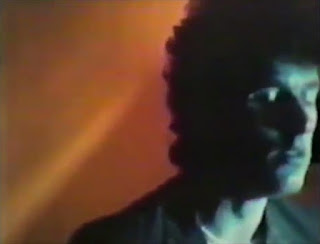 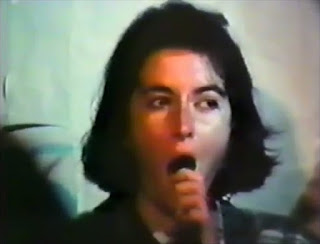 This really does come off like amateur hour, wannabe Argento with lots of orange, red and blue lighting plus a Goblin-like (more like Goblin-lite) metal score by Gregorio Cosentino and Enrico Vanossi. There are a lot of exact camera shots (plus liberal use of maggots) copied from Argento's Phenomena (1985) plus an “arpie” transformation scene (long demon nails shooting out underneath fingernails and ripping them off plus sprouting fangs knocking out teeth) that almost identically copies the centerpiece demon transformation scene in Lamberto Bava's Demons (1985), which was co-written and produced by Argento. In addition, the film tries to copy the demon-ripping-through-the-theater -screen scene and demon birth scenes from Demons. I guess it's OK to throw in some homages here and there, but this just comes off like an inept home movie rip-off. 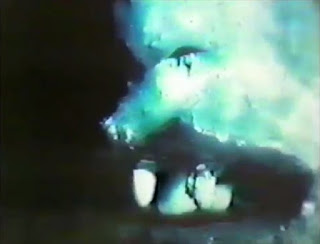 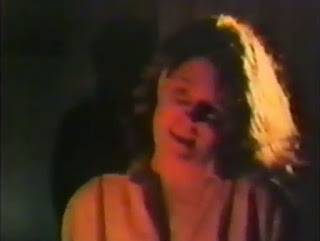 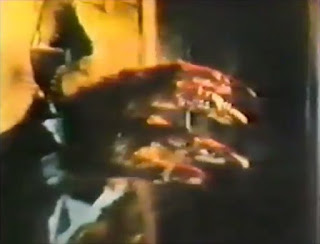 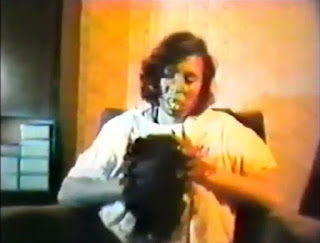 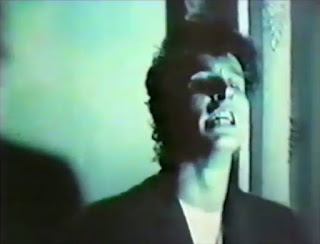 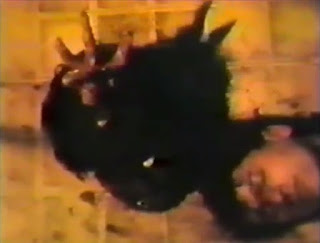 Further hampering this 35-minute film is amateurish acting, awful editing, nonexistent continuity and a plot that makes absolutely no sense whatsoever... Just see if you make heads or tails of the big finale! There was no point in even calling the monsters (h)arpies (essentially a bird with a female face from Greek and Roman mythology) and then turning them into non-bird flesh-eating demons. The director doesn't even bother giving us any understanding of them to make them interesting. It also doesn't help that the quality of the only print floating around is in such bad shape you can't even tell whether it was shot on video or low-grade film stock. Salerno also wrote, produced, edited and did the special effects (some of the low-budget splatter is OK). It was filmed in November and December of 1986 and entered into the competition at Mystfest in 1987.