China. 200 B.C. - A group of monks put a amulet inside a coffin with a corpse and drop it down into a cave. Afterward, the leader (Yoshiteru Otani) decapitates all of his followers with his samurai sword and then slashes his own throat. Cut to present day New York City. Martial arts instructor Luke Curtis ("He's not one of the best... he is the best!") finishes up a lesson with a "pig honky" client of his and gets ready for his big trip over to Hong Kong, where he'll do some more training with martial arts guru Master Leung (Duncan Leung). Accompanying Luke (Warhawk Tanzania) on his trip is one of his students, Rodan (Wilfredo Roldan), a coke dealer / gang banger who really could use some soul cleansing. The two men arrive in China, go to the camp for some laughable training exercises and then venture into the woods to meditate. While there, they stumble upon the cave. Despite Luke's "bad vibes," Rodan finds the coffin and, unbeknownst to his buddy, pockets the amulet. Both men get on the midnight flight back to the U.S. ... but they're not alone. As it turns out, after they left the cave, a living corpse (actually a resurrected demon) busted out of the coffin, made its way to a dock, possessed a businessman (Aki Aleong) and then hitched a ride aboard a ship heading to, you guessed it, New York City.

Once the ship arrives in New York Harbor, the possessed dude (now blinded and sporting some huge white eyeballs; an effect achieved by having the actor close his eyes and painting his eyelids white!) stumbles down the street and disappears into a tunnel. His chest bursts open and something comes out. Not long after, mangled corpses start turning up in the subway. The amulet, which Rodan now wears around his neck, seems to have some kind of power over the demon / monster / zombie or whatever it is and the creature would like it back. Lt. Cris Allen (Larry Fleischman) of the NYPD is put on the case, and he's assigned new partner Mike (Stephen DeFazio) for a clichéd odd couple pairing. Cris is street-smart and tough while Mike loves tennis and country clubs and thinks mutant animals (!) may be responsible for the killings. The two men hit the streets to try to figure out what's going on and don't seem to take an eyewitness who claims to have seen "a deformed monster" in the subway all that seriously. Meanwhile, there's a vicious rivalry going on between two rival gang factions: one a Chinese gang called "The Red Dragons" and the other a black gang called "The Black Spades" (seriously... ).

If you're sitting there at home pulling out your hair because you can't decide whether to watch a blaxploitation movie, a demon movie, a kung fu movie, a gang movie or a buddy cop movie then don't fret: Devil's Express has got you covered on all fronts. So does it actually pull any of that off successfully? No, it does not... but that is not necessarily a bad thing depending on what kind of viewer you are. Most of the acting is terrible, the characters aren't the least bit likable, the editing is ragged, the dialogue is boring, the blood is tomato soup and the action is just pathetic. The subway horror scenes are few and far between to begin with but the lighting is so dark (even in the restored version) you can barely even see anything. The demon itself is not fully revealed until the very end but, again, it's difficult to really make the thing out because of the lighting and editing. Where this truly shines for fans of bad movies is in the fight choreography, which is some of the worst ever. For starters, the black actors clearly have no real martial arts training and are pitted against Asian actors who do, which is extremely awkward to watch (and makes it extremely difficult to believe that the "Spades" could whip their asses). That's made even more awkward than it already is by the fact fists and feet typically don't come within a foot of their desired target. Add some canned 70s-style kung fu sound effects for the body impact and the back alley brawls are a laugh a minute. I am still laughing writing this up a few days later.

This film is also odd in that there's no real central focal point. Top-billed Warhawk Tanzania (whose name cannot be said enough in its entirety as far as I'm concerned) features prominently in the beginning, but is strangely absent from the majority of the mid-section when it focuses its attention over on the cops, the gangs (of which Luke has no involvement because he's an upstanding guy) and the murders. Though Tanzania's acting skills and on-screen charisma border on nonexistent, he does at least come through for a hilarious finale; strutting around, doing various cliché kung fu poses and beating up a bunch of guys (and the demon) while wearing gold lamé bellbottoms. The "actor" had appeared in another kung fu blaxploitation flick called Black Force (1975) before this one, but nothing after.

The major talents to emerge from the production were director of photography Paul Glickman, who'd go on to shoot many other films (including a half-dozen for Larry Cohen) and assistant cameraman Stefan Czapsky, who'd move up the ranks to become a cinematographer himself (winning some major awards for Tim Burton's Ed Wood [1994]). David E. Durston (director of the cult classic I Drink Your Blood [1970]), Sherry Steiner (from several early William Girdler films), Domonic Paris (director of Dracula's Last Rites [1980]), Fred Berner (later an Emmy-nominated TV producer) and Brother Theodore (in a truly bizarre cameo as a manic preacher) all have small roles, as well. 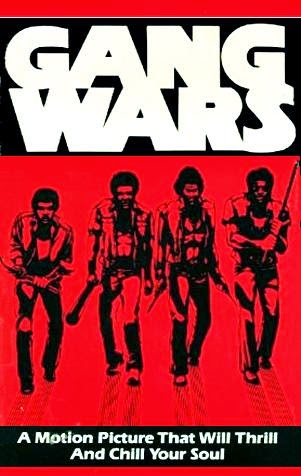 Though listed on IMDb under the title Gang Wars, this was filmed as The Phantom of the Subway and was first released theatrically under the Devil's Express title in 1976. The Gang Wars moniker was a re-release title hoping to cash in on the success of The Warriors (1979). There was at least one early U.S. VHS release on the Simitar label (under the Gang title) and one early pre-cert issuing in the UK by FLK Video. In 2005, Videoasia either accidentally screwed up their packaging or intentionally led people astray with their DVD collection "Tales of Voodoo: Volume 3;" which claimed to contain Devil's Express, when in fact the movie on the set was actually The Devil (1981), a gruesome black magic film from Hong Kong originally titled Xie bo. It wouldn't be until 2013 that Code Red finally released the film legitimately.

SBIG
Posted by The Bloody Pit of Horror at 9:51 PM

Wow! I remember seeing this crazy flick on 42nd st. in the mid '80's! The title Gang Wars was made up to look like the Star Wars logo!

I'm jealous you got to have the 42nd Street experience. I'm always reading about it!