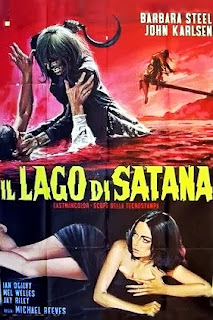 
It is directed by Michael "Witchfinder General" Reeves. It "stars" Barbara "Black Sunday" Steele. It is not to be confused with The She Creature, She Demons, She Devil or She Freak. It is The She Beast. And it is neither great nor terrible. Things begin with a bearded old man returning to his shack home, where he picks up a book penned long ago by his great great grandfather Count Gustav Von Helsing, which tells a familiar tale. In a small Transylvanian village, children have been disappearing. Knowing just who's responsible, a local posse - led by the village priest - hunt down a haggard, monstrous-looking witch named Vardella. They drag her outside her cave dwelling, take her down to the lake, tie her up, drive a long metal rod through her chest and then use some kind of wooden dunking contraption to drown her. Before dying, the witch swears she'll eventually return on the 200 year anniversary of her death to get revenge upon the descendants of her executioners. Oh, so you've already seen this one before? Yeah, me too. 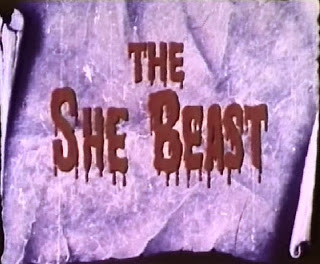 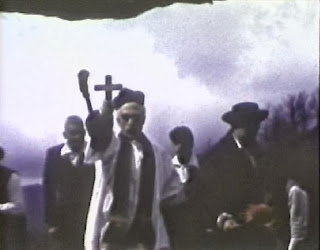 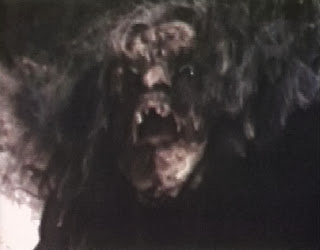 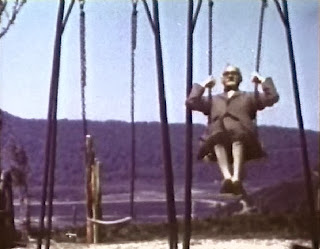 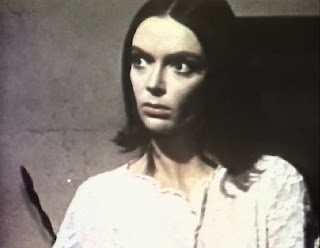 Jumping ahead to modern times, honeymooning British couple Philip (Ian Ogilvy) and Veronica (Steele) get lost while driving around in the Eastern European countryside. Looking for a place to spend the night, they end up at a run-down, flea-bitten hotel in Transylvania being operated by the extremely shady Ladislav Groper (Mel Welles), who serves them a bowl full of garlic cloves along with their tea. Aged, down-on-his-luck Fritz Von Helsing (John Karlsen), last descendant of the famous vampire-hunting family who's recently been evicted from his ancestral castle home, shows up to inform them of the superstitious local customs and about the legend of Vardella, but also adamantly states that "There are no vampires left in Transylvania." Against their better judgment, Philip and Veronica decide to stay... just for the night. As they attempt to break in the honeymoon suite, they catch Groper peaking in their window. Philip gets pissed, runs outside and beats him up. For revenge, Groper decides to screw around with their car. 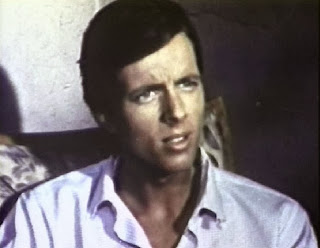 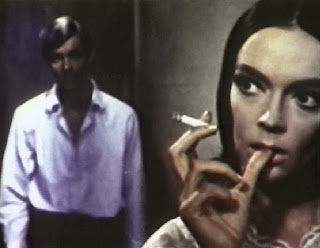 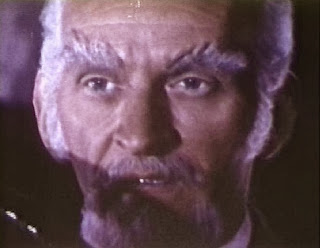 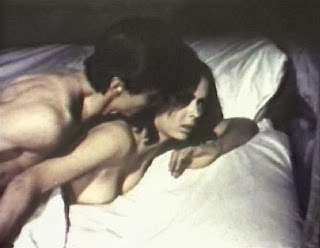 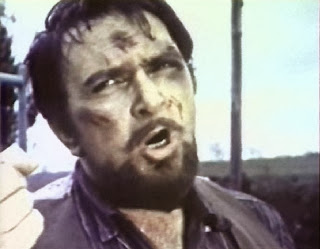 The following morning, the couple take off, the steering goes out on their car and they're run off the road by a trucker and into a lake... the same lake Vardella was drown in. Only Philip manages to survive the crash. The trucker takes the unconscious Philip and the dead Veronica back to Groper's hotel. When Philip awakens he's startled to find that his wife's body doesn't quite look the same. In  fact, she now looks identical to the lumpy-faced witch who'd died centuries earlier. But hey, at least she's dead! Von Helsing's warning to the skeptical Philip falls on deaf ears and he tries to perform some kind exorcism, but only succeeds in raising Vardella from the dead instead. She knocks him out and then takes off. The witch is sadly not really given much to do. She hacks up Groper with a sickle (and then drops it onto a hammer to form a familiar Communist symbol!) and scares a little boy spying on a cock fight, and that's about it. Our heroes need to somehow capture her and give her a dunk in the cursed lake in order to free Veronica. 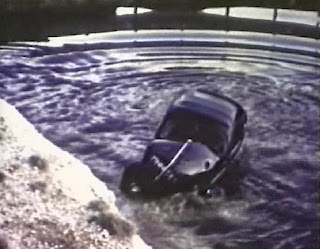 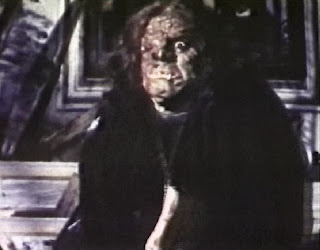 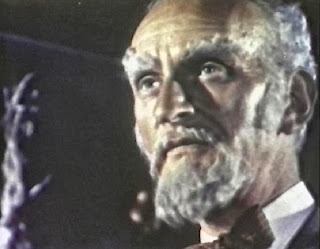 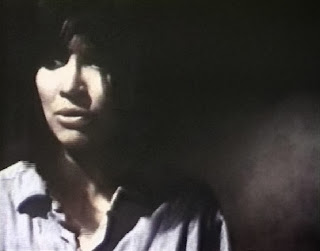 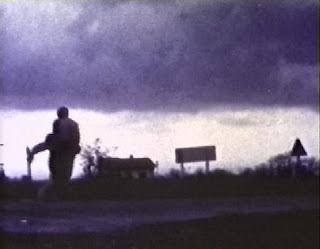 This extremely uneven film (partially financed by Reeves himself on an extremely low budget of 15,000 pounds) is a curiosity in that it's an Italian production filmed in Yugoslavia and stars mostly British and American actors, including many Roger Corman veterans. To solidify the Corman connection, Charles B. Griffith was the 2nd Unit Director and appears unbilled as a policeman. There's some odd anti-Communist sentiment sprinkled throughout, the makeup design on the witch (who's played by a man: Joe Riley) is extremely ugly and the film wildly fluctuates from wanting to be taken seriously to making light of the material. Toward the end, there's even a ridiculous Keystone Cops-style, speeded-up car chase scene complete with comic sound effects! This isn't unwatchable, it's just really... strange. 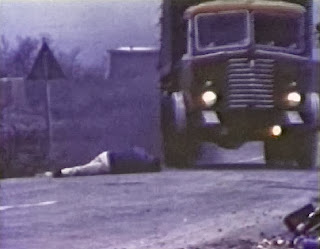 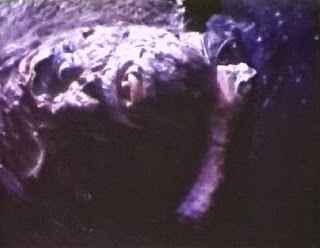 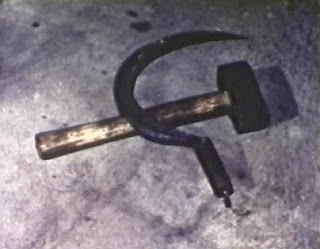 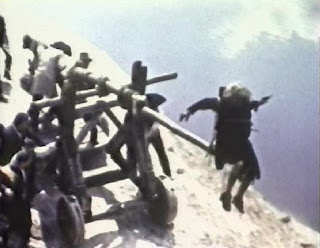 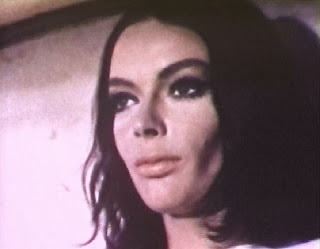 Though top-billed and promoted as the star, Steele is actually only on-screen for about 15 minutes and all of her scenes were filmed in just one (very long) day. She's, of course, good while she's around, but the same can't really be said for some of the other cast members. Ogilvy, a childhood friend of the director's who went on to play lead roles in Reeves' other two genre films: The Sorcerers (1967) starring Boris Karloff and Witchfinder General (1968) starring Vincent Price, is a little one-note and not particularly likable in the lead. Welles is even worse as an extremely obnoxious, annoying, LOUD, disgusting pig. He's also a huge pervert who not only peeps in windows and has nudie photos plastered all over his bedroom, but also attempts to rape his own niece (Lucretia Love) at one point! Thankfully, Karlsen partially makes up for the slackers giving an extremely likable and charming performance in his role. 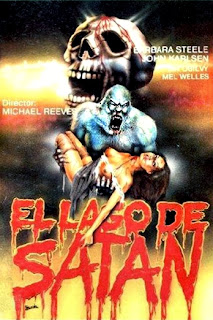 The She Beast, which played theatrically on a double bill with The Embalmer (1966) in the States, has fallen into the public domain. A lousy, washed out print is used for most of the DVD releases, including the one I viewed from Brentwood. In 2009, the film was rescued by Dark Sky, who remastered the original negative. Their release comes with a commentary track from Steele, Ogilvy and producer Paul Maslansky.