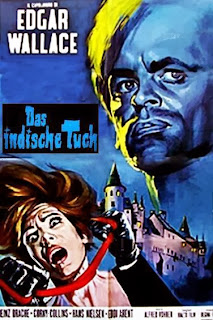 
Elderly Lord Frances Percival Lebanon (Wilhelm Vorwerg) is strangled to death with a scarf in his study by a black-gloved killer; a murder that is blamed on a heart attack. Various estranged relatives then show up at his country mansion in Scotland for the reading of his last will and testament. There's bad blood between nearly everyone who shows up. After all, there's half a million pound to divide up between many people and some feel like they're more deserving than others. But there's a catch to the will. Because of the venomous relations and the lot of them soiling the once-good family name, a stipulation of the will is that everyone remain in the mansion for six days and six nights to try to patch things up.  If any one is to leave early, they'll be unable to collect. And if someone is to - say - die, then their share will also be divided between the remaining family members. Lord Lebanon's lawyer, Frank Tanner (Heinz Drache), is to oversee and supervise the execution of these conditions. Immediately after the will is read, a storm breaks out, cutting out both the phone lines and the electricity, and causing a flood that effectively stranding everyone there. It's going to be a long night... and one of the potential heirs, Reverend Lionel Hastings (Alexander Engel), won't be surviving it.

The following morning, butler Bonwit (Eddi Arent) casually relays the information that the reverend has been strangled to death while everyone's enjoying breakfast. Suspicion falls upon pretty much everyone. There's the Lord's bitter wife Emily (Elizabeth Flickenschildt), who doesn't understand why she has to split up everything with a bunch of people she hardly knows. Then there's Edward (Hans Clarin), Emily and the late Lord's son, who obsessively plays the piano... and is clearly not right in the head. The Lord apparently got around as he has both an illegitimate son, Peter Ross (Klaus Kinski), an intense, possibly morphine-addicted sculptor, and an illegitimate daughter, Isla Harris (Corny Collins). And then there's Mr. and Mrs. Tilling (Hans Nielsen and Gisela Uhlen). He's an obnoxious, brutish jerk and a button from his jacket is found by the dead Reverend's bedside. She hates him and wants a divorce... but does she hate him enough to plant evidence to implicate him? Explorer Sir Henry Hockbridge (Siegfried Schürenberg), who's brought along a chatty parrot and a poisonous tropical spider from one of his Amazonian expeditions, and Dr. Amersham (Richard Häussler), the Lord's personal physician who discovered his body and may have falsified the death certificate, round out the group. And what would one of these things be without a hulking, Tor Johnson-esque cook / chauffeur / valet / handyman ("Chiko" played by Ady Berber)?

The suspect roster becomes smaller and smaller as various possible heirs turn up dead; mostly strangled to death by a scarf. Apparently, Lord Lebanon picked up a dozen of them while in India... and the killer is going to need most of them in this Ten Little Indians-style krimi based on the novel "The Case of the Frightened Lady" by Edgar Wallace. The mystery elements are just middling and the plot set-up is an all-too-familiar one, but the cast is very good, it features some good art direction (lots of use is made of catacombs and secret passageways) and is nicely photographed (most of the murder scenes are done from the killer's point of view and feature the killer's arms sticking out from behind the camera twirling the scarf). Despite the many murder scenes and a high body count, the tone is relatively breezy and there's a good deal of humor. Arent, almost always used as annoying, bumbling comic relief in these things, gets to pull it back a notch here.

Director Vohrer made tons of these films and is the most prolific of all the krimi directors. His other credits in this subgenre include Dead Eyes of London (1961), The Door with Seven Locks, The Inn on the River (both 1962), The Squeaker (1963), The Mysterious Magician (1964), Hunchback of Soho (1966), The Bloody Dead, The College Girl Murders, The Horror of Blackwood Castle (all 1967), The Ape Creature, The Zombie Walks (both 1968), School of Fear, Terror on Half Moon Street (both 1969) and probably a few more I'm forgetting.