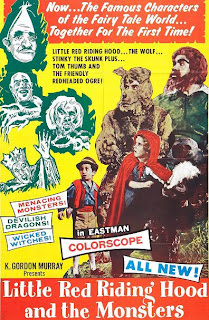 
Capercita y Pulgarcito contra los monstruous, translated to "Little Red Riding Hood and Tom Thumb vs. the Monsters" but first released here as Tom Thumb and Little Red Riding Hood, was entry #3 in an atrocious Mexican children's series. It was a follow-up to La capercita roja (1960; American title; "Little Red Riding Hood")  and La capercita y sus tres amigos (1961; American title: "Little Red Riding Hood and Her Three Friends"). K. Gordon Murray cheaply acquired the rights to all three (as well as many other films shot South-of-the-border in the late 50s and early 60s) and had them horribly English dubbed at his studio in Coral Gables, Florida. They then went on to entertain many American kiddies of the day on television and as matinee features and made Murray a nice profit in the process (though not enough to keep the Internal Revenue Service at bay). The combination of the original films being quite awful and cheaply produced to begin with, combined with the laughably bad new dubs, turned many of these into favorites for fans of bad movies. While René Cardona's Santa Claus (1959) is probably the most famous of these releases, this one's every bit as bizarre and surreal. 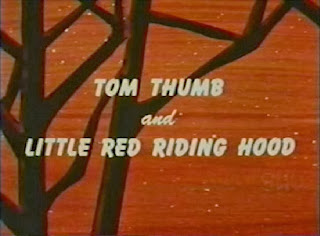 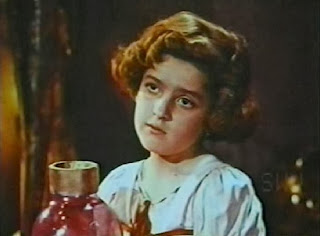 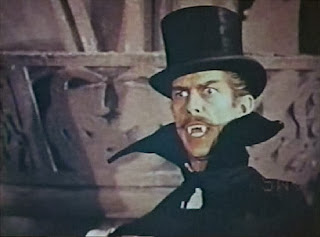 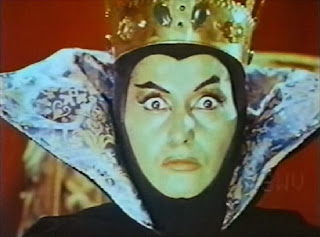 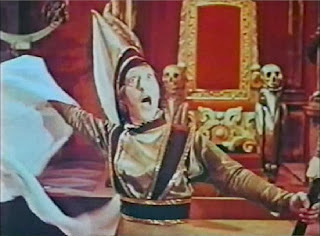 In a castle in "The Devil's Dominion" live all of the evil beings and monsters from our childhood nightmares. There are the expected types: a cackling old witch with a broom, a caped vampire (Quintín Bulnes) and a Frankenstein monster, as well as some ridiculous new additions to monster lore. There's "Carrot Head;" whose physical description doesn't require further comment, "Two-in-One;" a Siamese pairing featuring a bald guy and a caveman (!) named "Dog Face" (!!), "The Father of Hurricanes," a fat man who can blow people over just by breathing on them and others. They're all ruled over the by the wicked "Queen of Badness" (Ofelia Guilmáin), who is also Snow White's evil stepmother and is designed closely after the witch in the classic Disney cartoon. The monsters are currently holding a trial because two of them; an ogre (José Elías Moreno) and a wolf (Manuel 'Loco' Valdés) were sent above ground to cause trouble and ended up getting distracted. Instead of eating Little Red Riding Hood (Maria Gracía), the wolf was kind to her, and instead of eating Tom Thumb (Cesáreo Quezadas), the ogre ate spinach and cereal. Because of this, The Queen takes it upon herself to cause various problems for the humans. 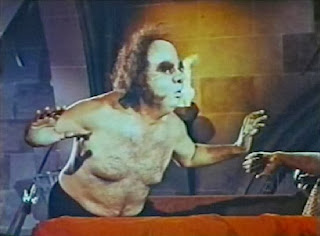 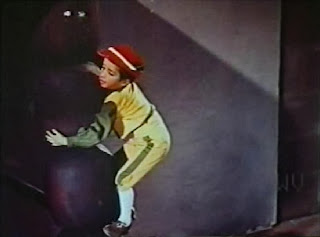 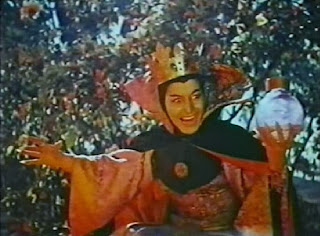 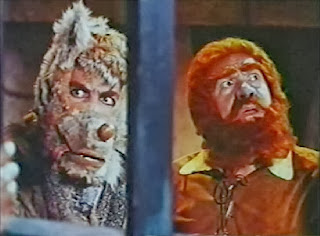 The Queen makes a visit to the village, poisons the water supply and then causes a massive heat wave. Everyone who drinks the contaminated water promptly turn into either monkeys or mice. Little Red Riding Hood must then go on a quest to the Devil's Domain to save the day. She's joined by her white dog Duke (Doncel), as well as Tom Thumb and a spastic, fast-talking skunk named - what else? - Stinky (Enano Santanón). They go to visit "The Fairy of Dawn," who transforms Tom into a normal-sized boy for the adventure and then touches everyone with her magic sparkler wand so that they won't suffer from hunger, thirst or the cold. Once they enter the domain of the monsters, the Queen sends out a bulletin to all monster to "kill them without hesitation!" A bunch of strange creatures, including a giant crab and a robot, show up and try to kill them. There's also a kidnapper with a net who says "I kidnap children who are disobedient because they are tender and make good broth!" 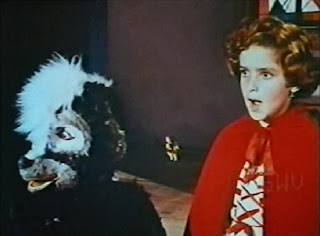 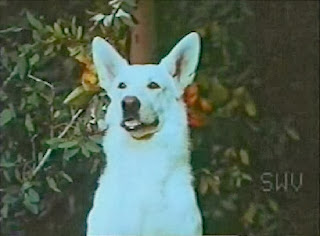 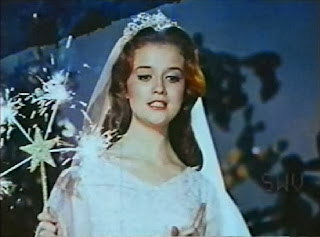 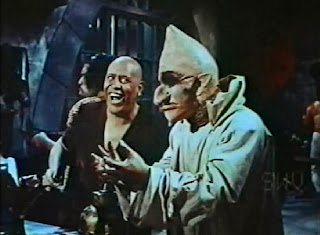 In between scenes of the kids and their quest, the film cuts back to annoying and painfully unfunny comic scenes of The Ogre and Wolf (who've been sentenced to death) in their prison cell. They get into a sub-Three Stooges style fight while arguing about a piece of chicken and do other stupid things. Eventually, the prisoners are taken to a private torture chamber where they have their feet tickled with features, are force fed water until their stomachs swell and it's squirting out of their mouths and are then tired to a table with an electric saw that threatens to cut them in half long-ways. And hey, I didn't even mention the amazing fire-breathing dragon yet! Or that the cast break out into song every once in awhile. The songs are absolutely terrible, and for some reason the singing voice for Little Red Riding Hood is that of a deep-voiced adult woman, which needless to say is pretty hilarious coming out of the mouth of an 8-year-old. 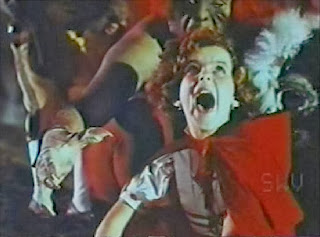 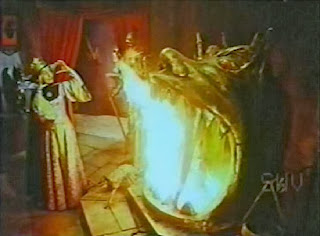 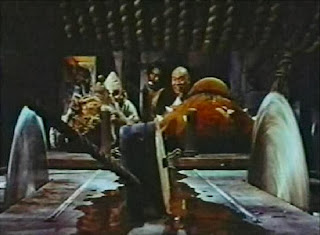 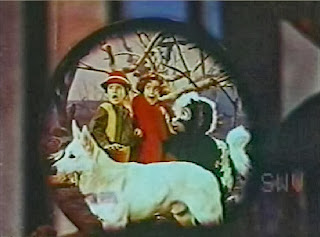 Many scenes in this one are highly questionable for the target audience. Not only is much of it downright weird and creepy, with horrific set designs and a gaggle of nightmarish creatures, but it's also shockingly violent at times. Characters are constantly being hit over the head and tortured and the adult characters keep threatening to mutilate, kill, and in one case eat, very young children. During the finale, the evil witch even threatens to rip Little Red Riding Hood's eyeballs out with her fingers! The kids themselves aren't immune to this over-the-top violent behavior either. At one point, they get revenge on a guy by stringing him up by his legs from a tree and then beating him with sticks like a piñata. Other moments are strangely, almost uncomfortably perverse ("Let me go you dirty old man!"), such as when one of the monsters is held down and the kids rip out his chest hair and then stuff it into his mouth (!!) It's no wonder this either horrified the kids who saw in back in the 50s... or just made them feel really funny. 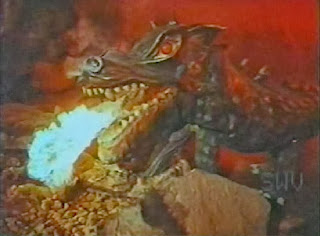 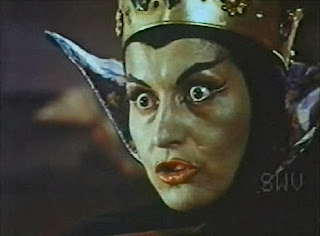 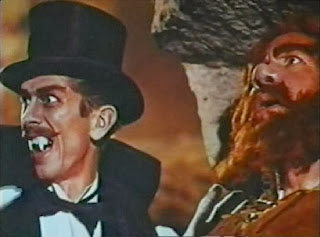 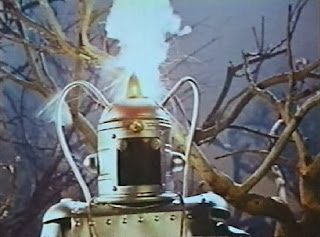 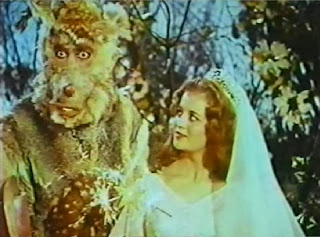 One minute you'll be in awe as the weird events unfold before your eyes, the next you'll either be laughing your ass off at the filmmaker / cast's expense (or simply annoyed). It's truly sensory overload, but in the best of ways. There's wild variance between the quality of each individual set, performance and monster costume. While some are laughably awful, others are nearly passable. The songs are all ear-splittingly awful and corny "messages" are clumsily shoehorned in throughout with even less subtlety than an episode of Full House. Still, this manages to transcend all that because it's just so bloody weird that it must be seen to be believed. It also possesses a very odd charm to it that only a small handful of 'so bad it's good' movies actually have. There's always something genuinely surprising going on and for that alone I'd recommend giving this a look. 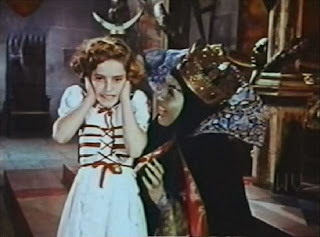 Something Weird distributed this on VHS years ago but it's pretty much out of circulation by this point. If a DVD release ever happens, this is almost guaranteed a healthy cult following.