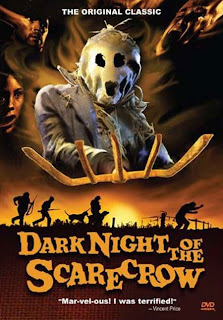 
Mentally-retarded Bubba Ritter (Larry Drake) is ridiculed and bullied by many in the small farming community in which he lives. A 36-year-old with the mind of a child, Bubba's best friend is Marylee (Tonya Crowe), a little girl whom he plays with. That innocent friendship is looked down upon my many in their community despite being sweet and completely harmless. One day after playing in a field, Marylee sneaks into someone's yard to look at their water fountain and garden gnomes and gets attacked by a dog. Reactionary (and incorrect) small town gossip quickly spreads around, prompting short-tempered mailman Otis Hazelrigg (Charles Durning), who hates (and spies on) Bubba anyway and may be projecting because of his own unhealthy attraction to little girls, to take justice into his own hands. Along with greasy mechanic Skeeter (Robert F. Lyons), obese mill owner Philby (Claude Earl Jones) and redneck farmer Harless (Lane Smith), Otis hops in his pickup truck with a couple of dogs and decides to hunt Bubba down and punish him for "killing" little Marylee. 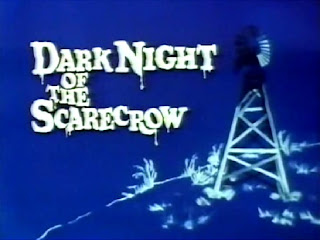 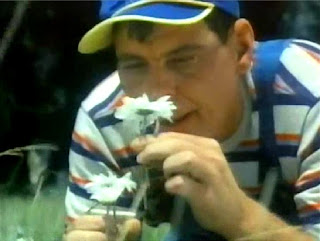 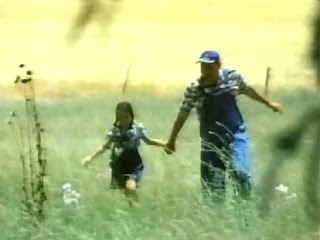 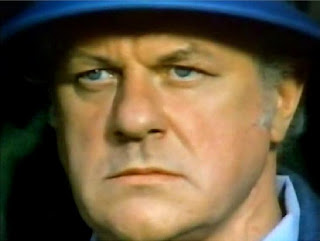 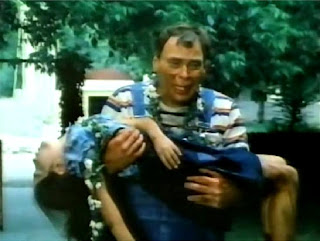 Bubba returns home in a panic, where his protective mother (Jocelyn Brando) encourages him to play "the hiding game" until everything blows over. Bubba goes out into the field and hides inside a scarecrow. When Otis and company discover where he is, they shoot him over 20 times. Immediately after, the men get a call on the CB telling them that Marylee is OK and that Bubba had actually saved her life. Oops. Things go to court, but the four killers, who'd placed a pitchfork in the unarmed Bubba's hands after they gunned him down, are acquitted of all charges and allowed to walk free. Bubba's ma reminds them that "there's other justice in this world besides the law." And she's right. Someone or something starts stalking and killing the men responsible for Bubba's death. Before each murder a straw-killed scarecrow appears near their homes as a calling card that their time is up. 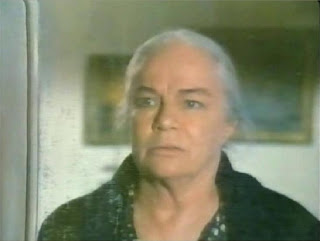 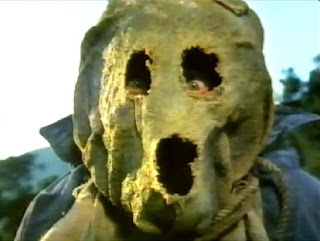 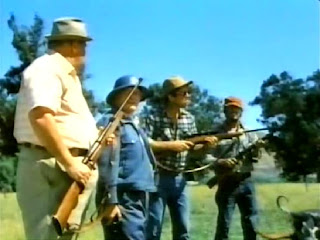 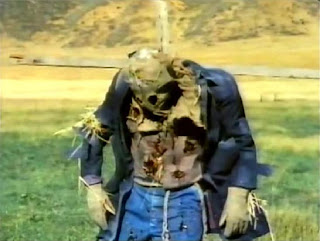 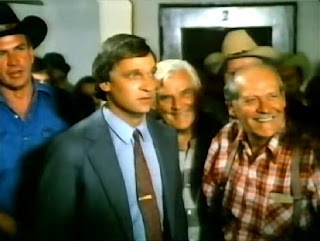 After Harless is ground up by his brush machine, the other three start to panic and try to place a human face on the killer. Is it Mrs. Ritter wanting revenge for her son's death? Or Marylee, who claims to still see and talk to Bubba long after his passing? There's district attorney Sam Willock (Tom Taylor), who is assured of their guilt and promised that if he found a single shred of evidence he'd make sure they were all put on death row. Or perhaps somehow, some way Bubba himself has managed to return from the grave to settle the score. The film saves the big reveal for the end but, in the meantime there's death by pitchfork, shovel and, during the film's most memorable bit, a man is trapped in a silo and suffocated by corn. 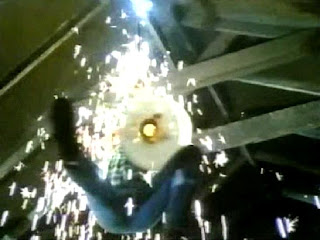 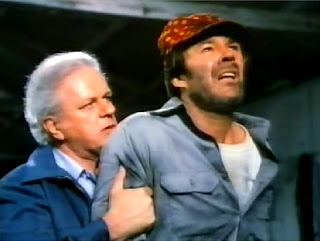 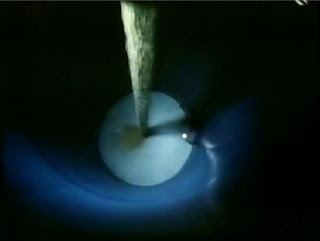 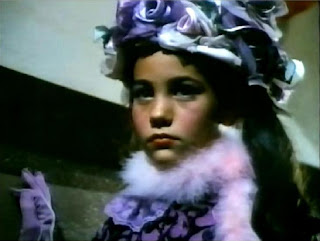 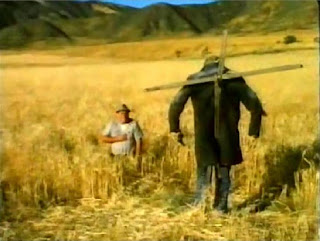 Dark Night of the Scarecrow managed to scare a whole generation of kiddies when it debuted on TV around Halloweentime in 1981. There's a certain nostalgia value here for some of us, as well as some genuinely creepy moments if you don't mind something slower-paced, quiet, atmospheric and somewhat ambiguous. A few of the actors overdo it a little but for the most part the acting is fine. Durning turns in a truly loathsome character (Strother Martin was originally cast in the role but died before production began) and Drake would go on to play another sweet-natured mentally-challenged man on the hit TV series L.A. Law (which netted him two Emmy Awards and three Golden Globe nominations). John Steadman (from THE HILLS HAVE EYES) and Alice Nunn (FANGS) both have small roles. The eerie music score is from Glenn Paxton. Director De Felitta is best known as a screenwriter: AUDREY ROSE (1977), THE ENTITY (1981), etc. 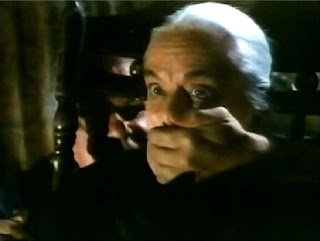 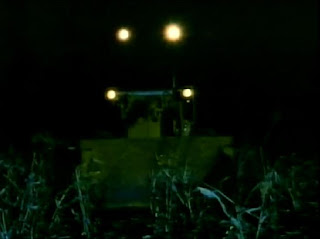 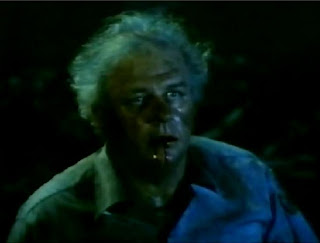 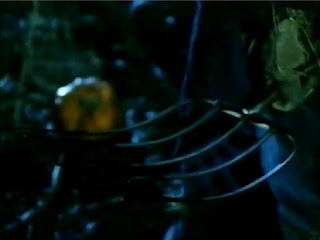 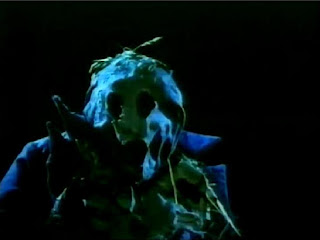 Front Row and Key both released this on VHS back in the 80s. A belated DVD and blu-ray release came from VCI Entertainment in 2010. It comes with a documentary short on the production. I'm sure you can tell from my screencaps that I watched the video version.

Was this actually made for TV? I seem to remember reading something like that. If it was, it's one of the best ever made.

I remember actually catching this on a VHS recording I had borrowed from my asshole stepbrother during one of his more agreeable moods (he would soon demand it back, of course) for another film. You ever borrow a VHS tape for a movie and just so happen to accidentally allow it to overrun then another movie would appear, forgotten by the owner who had taped something before it and the timer had been set for a few more hours? Yes, that's how fortunate I was! Dark Night of the Scarecrow was taped off of TBS when it used to show cool movies late at night and this was happenstance that I actually had a chance to watch it for the first time. Because I was only maybe four at the time, I didn't catch it on first-run. But TBS would show stuff like this all the time, and my stepbrother, I think, had taped an Atlanta Braves game or something that ended quicker than he had anticipated. So Dark Night of the Scarecrow was played probably as filler. I benefited from this let me tell you!

It *debuted* on TV. Not sure if one of the major networks made it or just bought the rights to it, but it still counts as a TV movie either way. Agree it's one of the better ones!

And yes crow. That takes me back to my childhood when I'd just pop a 6 hour tape in the VCR and record whatever happened to be on channels like TBS, USA, etc. late at night. I discovered some of the best stuff that way: by complete accident.