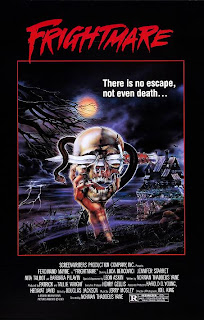 While doing a commercial, world famous horror film star Conrad Ragzoff (Ferdy Mayne) gets fed up with the obnoxious director and uses his cane to knock him over the balcony to his death. Years later, "the last of the great giants of the horror cinema" is speaking at a college before the student film society and collapses from a heart attack. He's taken home, where he regretfully tells his wife Etta (Barbara Pilavin) "I still have so much to do... I've never died before." At least he gets to do one of those things: suffocating his sniveling assistant / chauffeur Wolfgang (Leon Askin) to death with a pillow, before he croaks. After claiming his twentieth victim, Ragzoff plays the organ, climbs into a coffin and passes on. Not one to go out with a whimper, Ragzoff has already told the press that he refuses to be cremated because he plans on coming back from the dead, has purchased a huge mausoleum with a flickering neon star to house his corpse and has even pre-recorded his own sign off video so that he can be the star, even at his own funeral. 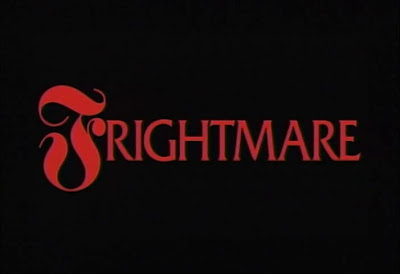 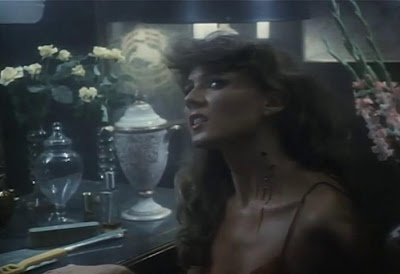 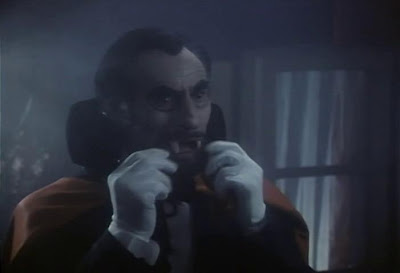 Seven members of the student film society, led by Saint (Luca Bercovici) and his reluctant girlfriend Meg (Jennifer Starrett), get wasted and go to the mausoleum late one night, where they decide it would be swell to sneak inside and steal Conrad's corpse. Stu (Jeffrey Combs, in his horror movie debut) climbs onto the roof, busts in through the skylight and lets his friends inside. Despite some security measures (Conrad appears on a video screen to warn them), they manage to get in and out with the body without being detected, then take it back to their home. They eat spaghetti wearing monster masks, dance with the corpse, kiss the corpse and then set it down inside a coffin in the attic and plan to return it to the mausoleum eventually. The next day, detectives (led by Chuck Mitchell aka Porky from the 80s comedies of the same name) are already investigating the break-in and missing body. When Conrad's widow and her friend Elizabeth (Nita Talbot) get word, they decide to hold a séance to try to contact his spirit and have it tell them where the body is. Instead, they accidentally raise Conrad from the dead. 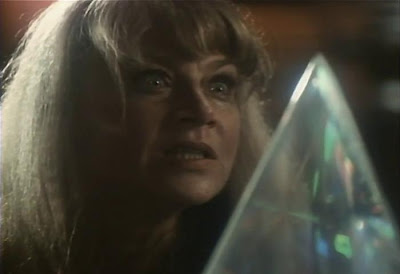 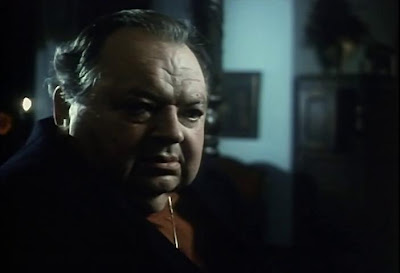 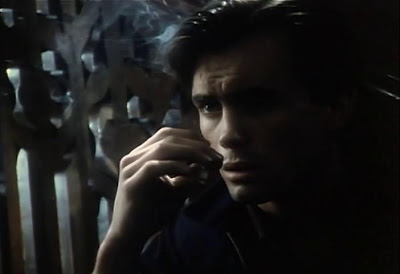 Because Conrad had gone to hell for his Earthly deeds, he now has supernatural powers. He rips a guy's tongue out with his fingers, causes a girl to spontaneously combust, lures a guy into his mausoleum and kills him with toxic fumes, crushes a head with his coffin, decapitates someone with a sword (a crow then feasts on the head) and levitates a casket and sends someone straight into an incinerator. Strangely enough, Conrad's actual revenge on those responsible for stealing his corpse is the worst part of the movie! The murder scenes are mostly botched because the director seems to have no clue how to set up a shock scene or build suspense. It's also interesting that most are killed inside the house over a period of several days, yet no one hears the screaming at night and no one notices a charred corpse lying plain as day right in the front lawn! The fact the victims aren't given any noticeable personality traits (aside from being borderline obnoxious) doesn't help matters, nor does the fact that this movie is so darkly photographed you can't see half of what's going on. What sandwiches these scenes (the opening twenty minutes and the last ten minutes) are the highlights of the film. 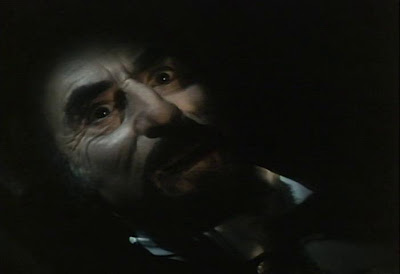 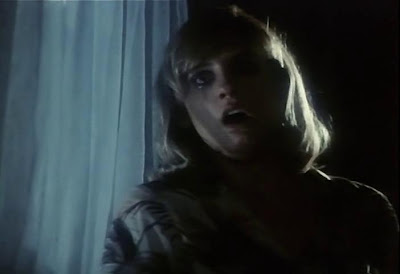 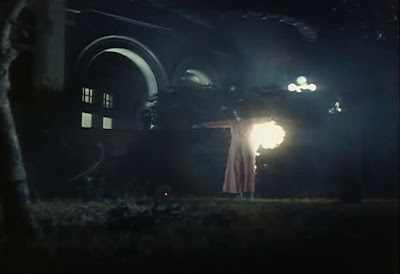 Really, the best thing this has going for it is its lead actor. Mayne (best known for playing Count von Krolock in Polanski's THE FEARLESS VAMPIRE KILLERS) does a wonderful job in his role; making for a pretty creepy zombie-killer once resurrected and getting to channel Christopher Lee as the pretentious, arrogant actor the rest of the time. Solidifying the Lee connection, film clips used to illustrate Conrad's early career are actually Lee movies! There are nice supporting performances from Pilavin, Talbot and Askin, as well. The rest of the cast is pretty amateurish, with just a few of them going on to bigger things. Lead actor Bercovici would later become a director and, of course, Combs would star in RE-ANIMATOR (1985) in a few years and become a beloved genre icon. 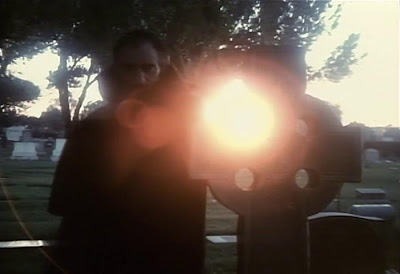 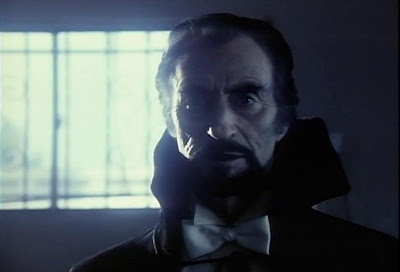 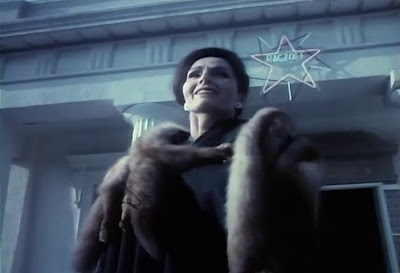 Director Vane also co-directed the underrated THE BLACK ROOM (1982) and made the rancid "comedy" MIDNIGHT (1988) starring Lynn Redgrave. Husband-and-wife producers Patrick Wright and Tallie Wright (Cochrane) were veterans of the 70s exploitation circuit and both appear here in cameos. The masks and posters were provided by Forrest J. Ackerman. 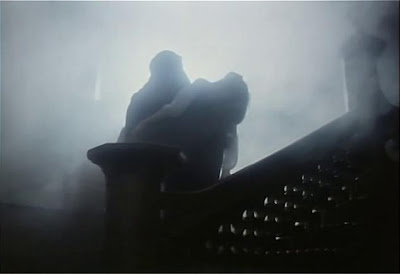 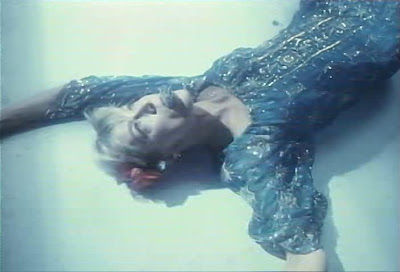 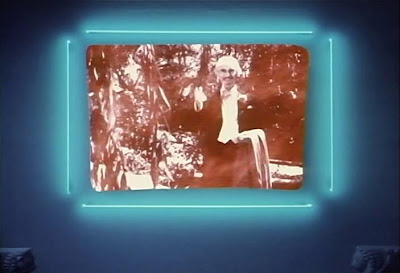 In the 80s, the company Prism released a "sequel:" Frightmare II, which turned out to be a re-titling of the 1974 British cannibal movie FRIGHTMARE. The 1981 Frightmare was filmed as Horror Star (and was also released as Body Snatchers) and released in 1983. Troma handled the DVD release.

I would agree that the movie itself isn't much but Mayne is great!

He'll pop up every once in awhile in something I watch, but usually in a small role. So it was nice to see him get the lead in something, even if that something could have been better.

Yeah, I even saw him in a small cameo type role in an episode of the British TV show ARE YOU BEING SERVED!