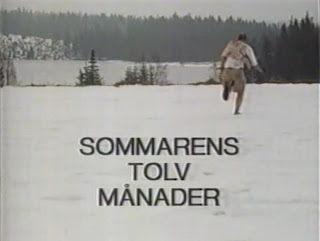 ... aka: Twelve Months of Summer, The

It's wintertime in Sweden and there's a foot or more of snow on the ground. But somewhere hidden amongst the snow-covered trees and a thick blanket of fog that completely surrounds it is a small area of ground with complete summer-like conditions; sunshine, bugs, green vegetation, rainbows and a warm temperature. It's something a group of government scientists have been working on, or "climate improvement" as they phrase it; an attempt create 'perfect' summertime weather year round. But from the opening credits, we know this oasis amongst the frigid conditions isn't quite right, as a man is seen fleeing from the area in horror. He's taken back to the lab and assessed by doctors, who are perplexed at his condition. From the man's perspective, he's speaking lucidly, but to everyone else's ears what's coming out of his mouth is gibberish; almost a brand new language. And the same goes for how the victim's brain processes what everyone else says. The man's brain has been completely altered, or as one of the doctors puts it, "You could say it's like he's typing on a keyboard where the keys have been switched." 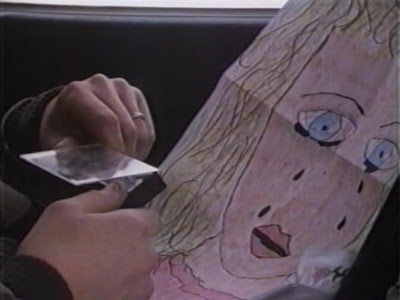 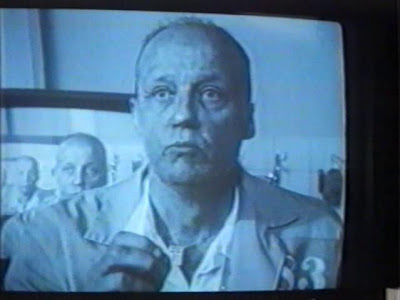 The condition is similar to something called aphasia; where cells in the left hemisphere of the brain have been atrophied, but the man's condition is a brand new phenomena, as there's no physical damage. It seems that tampering with mother nature has unleashed a dangerous 'psychic power' that penetrates and manipulates the senses. Prolonged exposure to the force leads to hallucinations, suicidal thoughts and the inability to differentiate between reality and imagination. Thankfully, the force has been contained within the test area for the time being, but the scientists are starting to become worried. They immediately evacuate all of their personnel, but decide they need to do more research into this phenomena before they decide their next actions. So what better thing to do than lure six lowly construction workers there under fall pretenses? 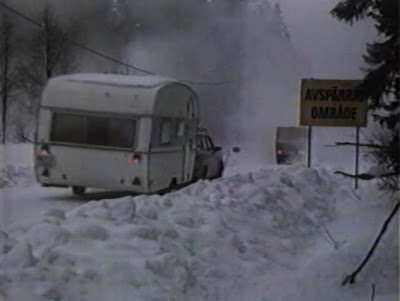 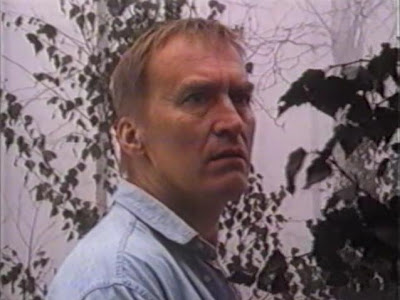 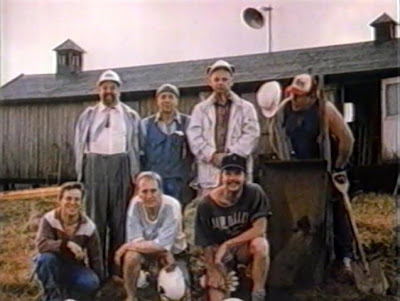 Tempted with a ten times higher than usual salary upon completion and free access to whatever goods they want while they're there (including booze, smokes and even hookers), they're able to easily get their guinea pigs. Hard-working high school drop-out Roger (Hans Mosesson) wants to build a better home that his wife Vanja (Bergljót Arnadóttir) and their little girl Emma can be proud of. Lars (Göran Stangertz) has a very pregnant girlfriend and would like to retire from hard labor and open up a bike shop. Kalle (Eddie Axberg) dreams of financing a marathon run across Europe. And so on. The men are blind-folded, taken to the secret site where they're to stay within the test area for an entire year (if they leave they don't get paid) and are given instructions on what they're supposed to be building one small section at a time, but are never given a complete diagram of it. They've also been given just a vague description of the strange, powerful psychic phenomena occurring there. In other words, they're told if they see something strange, to not freak out. It'll pass. Little do they know, but they're constantly being monitored with video surveillance, and it isn't long before each of the men start behaving strangely and begin suffering from troubling hallucinations, leading to insanity, violence and even death. 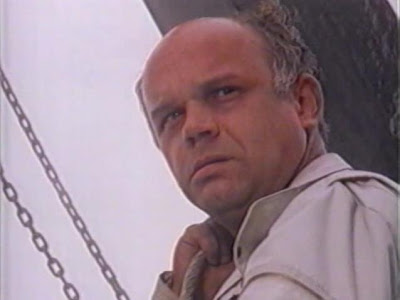 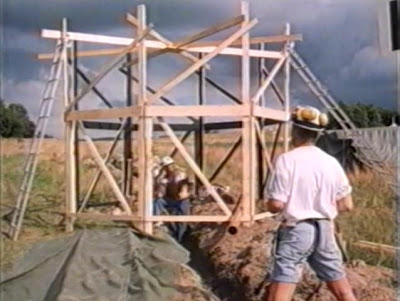 Throughout the course of this smart, thought-provoking film (which runs 2 hours, 10 minutes), many interesting and varied questions are raised. Would it really be worth it to go a whole year without seeing your loved ones to possibly improve the remaining ones? Is doing something you're not comfortable with ever worth the money? And naturally, the comment on how those at the top manipulate, use and then discard those in the working class to line their own pockets; little caring about the long-term effect on those 'beneath' them, is a subject that's as relevant today as it was in 1988. Hell, with how business and politics operate (at least here in the U.S.), it's probably even more relevant today than it was 20+ years ago. Throw into the mix undertones about how it's never a good idea to exploit, manipulate or underestimate the power of nature, and this film stands as a potent warning to mankind. We better learn how to respect one another and the environment... or else. The film manages to accomplish its goals and say what it wants to say without ever being too overt or preachy. 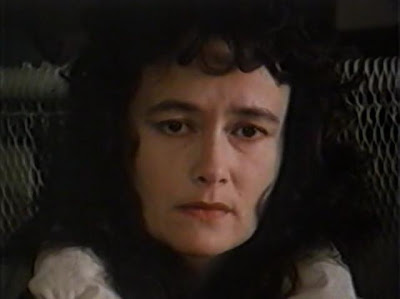 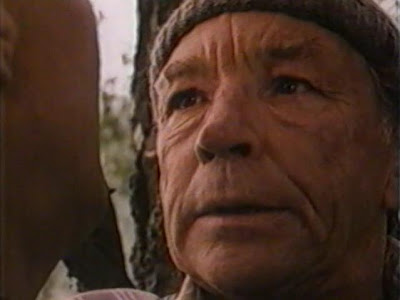 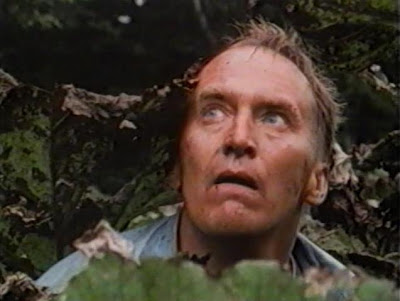 The premise is fascinating and original, the acting and dialogue are both good and the lead characters are all very well-defined. The film also manages to be quite eerie at times, without ever resorting to cheap shock tactics. The test area, which is lined with hundreds of enigmatically numbered signs that constantly make one question just what those numbers stand for (and also give the test site a prophetic, almost cemetery-like feel), is a great example of successful cost-effective art direction to generate mood. The film also ends on an effective, subtly apocalyptic tone. 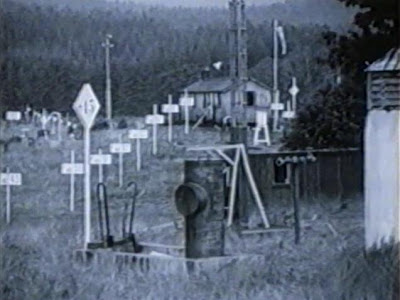 I must say, it's a damn shame we live in an age where a movie as good as this one isn't even available on VHS or DVD, yet millions can be conned into spending 20 bucks to add something as pathetic as M. Night Shyamalan's somewhat-similarly-themed big budget turkey THE HAPPENING to their home movie libraries. Sadly, Sommarens tolv månader has not been publicly shown since it aired on Swedish TV in 1988! There are rumors of a copyright dispute between the filmmakers and the TV network who broadcast it being the reason why it's been held up for so long. As of now, you'll have to settle for poor quality bootlegs (which someone at least took the time to subtitle) to see it.

Posted by The Bloody Pit of Horror at 8:29 PM

Any idea where one can locate a bootleg of this film?

I know where you can DL a copy of it, but I'm not aware of anywhere it was purchased.

Dear friends,
Thank you very much for your appreciation.
There is now a 90 percent chance that the film will be available again- after 25 years....
before the end of 2013. With English subtitles.
Best Regards
Richard Hobert
writer/director

Thanks for the great news, Richard!

When I saw it, I was GRIPPED by the story. I saw it in 1997, it was a BRILLIANT movie. When it came again, I was lucky, I got mum to tape it for me on her machine.

Now I only got the tape, but no VHS player!

I thought I'd find a DVD version, but nothing! Not happy about that!

I search all over. I can't find one. Sad. What to do? I keep trying, then I thought of using the Swedish language words of Twelve Months of Summer - "Sommarens tolv manader DVD" and here it is, this page came up so I reads and there, in the comments...

Now I read in the comment by Mr Robert Hobert, that it will be available soon. YES! I am very happy! Mr Hobert, thanks! I appreciates your words!

And the best thing about the movie? The English subtitles, as I am deaf, so I reads a lot and I loves the subtitles to tell me what the story was all about.

This movie struck a chord in my heart for years. I still thinks about the movie once in a while. It's a great movie!

Please bring the DVD version out, many people WILL loves the movie, it's great!

Dear Friends,
The release was a bit delayed because of change of distributor.Everything is now solved. A restored print of the film will be released on DVD- with English subtitles-in September 2014. Richard Hobert

Dear friends
The release was a bit delayed because of change of distributor. But everything is solved now. A restored print of " Sommarens Tolv Månader"/ The Twelve Months of Summer" will be released on DVD in September 2014- English Subtitles included.
Best Regards
Richard Hobert
writer/ director

Dear friends,
The release was a bit delayed because of change od distributor.But everything is solved now. A restored print of " Sommarens Tolv Månder" / The Twelve Months of Summer" will be released on DVD in September 2014 - English subtitles included.
Best regards
Richard Hobert

Thanks for the update Richard.
Can't wait to pick this one up and I'm glad it will finally be widely available for others to see!