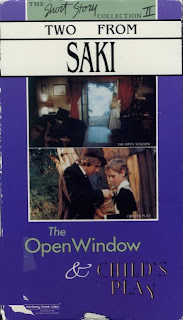 Here we have a middling 28-minute short that was financed by The American Film Institute, made its TV debut on the PBS series The American Short Story and made its VHS debut as part of Monterey Home Video's Short Story Collection (where it's paired with the 12-minute short THE OPEN WINDOW). It's based on the story 'Sredni Vashtar' by Saki (the pen name for Hector Hugh Munro). To many scholars, Saki / Munro is considered a master of the short story. Born to British parents in Burma, he relocated to England for studies, worked as a journalist there, served a spell for the Imperial Police in India and joined the British Army at the age of 43 to fight in World War I, where he was killed in 1916 by a German sniper. Aside from his stories, he also has two plays, one short novel and other works to his name. Munro is probably best known for the aforementioned story 'The Open Window' (a staple of high school literature classes), but this macabre tale of abuse and revenge has actually inspired more adaptations. It was also filmed in 1950 (as part of the Danger TV series), 1962 (as part of a UK mini-series called Saki), 1981, 1995, 2003 and even as recently as 2009. The tale also inspired the feature-length genre flick THE ORPHAN (1977), which was later annoyingly re-titled FRIDAY THE 13TH: THE ORPHAN to try to cash in on the Jason Voorhees saga.

Lonely orphan Conrad (Paul Schoeman) not only had to suffer the loss of both parents in a drowning accident, but is also stuck in a home at the mercy of the icy, evil and cruel Miss DeRopp (Savannah Bentley). Mostly forced to stay indoors, denied friends and kept sickly and frail by his new guardian (who it's strongly hinted at also sexually abuses the poor boy), Conrad's only companion is his beloved pet chicken Cackler. A neighborhood boy (Bill Barrett) might have the solution to his problems, though. For two silver candlesticks, he promises to give Conrad a rare, vicious, growling and cunning animal with supernatural abilities, which supposedly was coveted in the past by Egyptian pharaohs, Borneo pirates and even Napoleon Bonaparte himself. Eventually the trade is made, Conrad gets the creature (it's basically just a barely-seen, small black dog) and - after Miss DeRopp kills Cackler and serves him up as dinner - uses it to get revenge.

Seeing as how this story was written at the turn of the Century, I can see it being a pretty influential work as I've seen the same concept used numerous times before. However, that doesn't make this particular adaptation anything special. It's flatly presented, ordinarily directed and very predictable, but my primary gripe is with the weak, one-note performances. But hey, I can at least use this opportunity to pimp another American Short Story / Short Story Collection Monterey release; THE MAN AND THE SNAKE (1972) / THE RETURN (1973); a pair of well-done Ambrose Bierce adaptations worth seeking out.