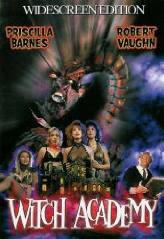 What we have here is an S&M-themed horror farce filmed exclusively in one house and littered with familiar faces, hit-or-miss slapstick gags, rubbery monsters and a generous helping of female flesh. At a sorority house, cruel queen bee Wanda (Suzanne Ager) and her underlings, bitchy Tara (Michelle Bauer) and bimbo Darla (Ruth Collins), are at a loss when plans to attend a party fall through. Bored, they decide to invite ultra-geeky would-be pledge Leslie Perkins (Veronica Carothers) over and plan to completely humiliate her. They mock Leslie's clothes as soon as she arrives and chain her up in the basement. There, she's visited by none other than The Devil himself (Robert Vaughn), who transforms Leslie into a sexy vixen who pretends to be Leslie's sister "Becky" and plots to get her own revenge on the sadistic sorority girls who mistreated her. She also occasionally turns into a large lizard monster who sucks out blood with a long tube-like tongue. Priscilla Barnes shows up as the sorority's sexy house mother, as does Jay Richardson as a sleazeball professor, just in time to fall victim to the creature.

The film's raison d'être is clearly to showcase the charms of the actresses on hand, and the film is reasonably successful on that front. Four of the five actresses have their own nude scenes and spend the bulk of their screen time running around dressed in bras, panties, mini-skirts and see-through lingerie. Not only that, the five are also given a platform to engage in farcical comedy and do their very best with the material handed to them. Unfortunately, the material handed to them just isn't all that good. I could never figure out where the "witch" in the title really stems from. Aside from making a telephone blow up (off-screen) several times, the sorority girls are never seen using any kind of special powers at any point in the film, though they'd obviously come in handy after a certain point. There are also some issues with tone. At times it seems like your standard cheapie horror-comedy spoof of deliberately cheesy gags (including a scene directly referencing the blood test in Carpenter's THE THING) and at others it seems like it's trying to find light humor in sadomasochistic behavior, kidnapping and cruelty.

The copyright in the credits says 1990, but it wouldn't be released until years later. In 1993, a heavily-edited version (minus all of the nudity) made its way onto the USA Network's Up All Night program. I found a listing for a German VHS release (under the original title LITTLE DEVILS) on Amazon from the mid 90s but the first home video release I'm aware of in the U.S. is the 2002 DVD through Ray's own company Retromedia. It's worth a look for fans of the actors, but I wouldn't really recommend it to anyone else.

That's disappointing, cap. I was hoping Witch Academy would be up to Hollywood Chainsaw Hookers, or at least Sorority Babes in the Slimeball Bowl-o-Rama, standards. I'll check it out anyway eventually, but not in a hurry.

Yeah, this one isn't as good as some of the others. My two favorites from Ray are Hollywood Chainsaw Hookers and Bad Girls from Mars. You should like the latter if you like HCH.