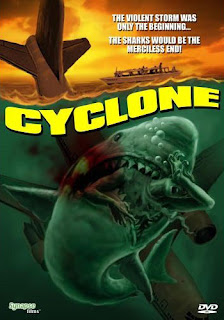 
As of this writing, this is only my third venture into the world of René Cardona, Jr. The first was the abominable killer bird flick BEAKS: THE MOVIE (1987) and the second was the equally awful softcore shark epic TINTORERA (1977), but thankfully this one's a hell of a lot better. It's kind of like one of those unintentionally campy Irwin Allen disaster movies, but with cannibalism, gore, shocks, B-grade horror/exploitation regulars and some fun JAWS-inspired shark attack scenes thrown in. At a tropical resort town in Mexico something's brewing in the skies. The birds are freaking out. People are quickly trying to bring in their boats and seek shelter. Yep, a surprise "cyclone" (hurricane) of epic proportions is coming their way! Unfortunately, not everyone has enough time to duck for cover or come inland. Strong winds force an airplane to crash right into the middle of the ocean. Those not killed in the impact have to grab the nearest life vest and immediately exit the plane before it sinks. A commercial fishing boat is also sunk, and those on board have to board a tiny life boat. And there's a somewhat larger glass bottom boat with about a dozen tourists on board also stuck out in that mess. The wind and rain insures everyone's swept further and further out to sea by the current, but somehow the three groups of people manage to find each other. Those on the life boat rescue the plane crash survivors and everyone ends up cramped aboard the glass bottom boat. The problem is that they're almost out of fresh water, out of food and there's no gas left, so everyone must play the waiting game. And the waiting game ends up being longer than anyone expected.

After much time passes and several failed attempts at fishing, the weak start dying off from previous injury, dehydration and/or starvation. The survivors are faced with a crucial choice... Perish or survive by consuming the flesh of the dead. Before long, chunks of people flesh are being dried out on top of the boat for sustenance. Scenes of the sweaty, sun burnt, miserable, bickering principals looking disgusted chewing on human jerky while children cry and the boat bobs up and down in the water might make one a little queasy. It also won't be everyone's idea of a good time, but for what it is, it's fairly well done. And I didn't even mention the killer sharks. They get a taste for human blood at the beginning when they pick off people exiting the downed airplane. Now they're circling the boat waiting for anyone to take a dip in the water.

The cast is decent enough. Everyone's favorite unibrow-sporting piece of Spanish man-meat, Andrés Garcia is on hand as the buff captain of a glass bottom boat. Hugo Stiglitz (who starred with Garcia in TINTORERA, from the same director) plays an airplane pilot. Adding to the camp appeal is an amusingly annoying Carroll Baker as a pampered middle-aged blonde who thinks her pet terrier "Christmas" deserves equal treatment. Lionel Stander is a husky-voiced, pipe-smoking businessman scouting the local lobster market. Arthur Kennedy is a priest opposed to eating people. Two of the females from Fulci's ZOMBIE are in the cast; Olga Karlatos as a very pregnant woman who ends up giving birth on the boat and Stefania D'Amario as a compassionate stewardess. Mexi horror star Carlos East also has a small role as the father of a missing girl (the film does unfortunately return to mainland from time to time). Also with Mário Almada, Miguel Burceaga (who'd later be billed as Mike Moroff for roles in such films as RETURN OF THE LIVING DEAD III and FROM DUSK TILL DAWN), Erika Carlsson, Gerardo Zepeda and no less than three generations of the Cardona clan: the director, his father (filmmaker René Cardona) and his son (René Cardona III) as young Thomas.

The tropical storm scenes at the beginning are surprisingly well done and convincing for a medium budget film like this. Models for the storm-hit town, boats and the airplane are all convincing.