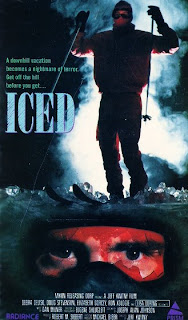 ...aka: Blizzard of Blood

Directed by:
Jeff Kwitny
Cory McGiver (Doug Stevenson) and Jeff Stinson (Dan Smith) decide to have a ski off to see who's man enough win the affections of blonde Trina (SLUMBER PARTY MASSACRE's Debra De Liso). Cory ends up smoking Jeff on the slopes and gets the girl, while Jeff proves he's a little on the unhinged side by having a conversation with himself in the bar later that evening, barging into Trina's hotel room unannounced and then deciding to work out his rage on the slopes by doing a little drunken midnight skiing. Instead, he gets himself into a little accident when he falls over a steep embankment into some rocks. Four years later, Cory and Trina - now married - and their friend Jeanette Foster (Lisa Loring) are on their way to an exciting ski vacation. They've all been invited by real estate agent Alex Bourne (Joseph Alan Johnson, who also wrote this) to one of those time share weekends, where they get to check out a remote ski lodge free-of-charge that they can purchase for 250,000 dollars at the end of their stay if they so chose. Some other friends - wealthy coke-snorting investor Carl (Ron Kologie), snobby pediatric doctor John (John C. Cooke) and his nurse girlfriend Diane (Elizabeth Gorcey), who has psychiatric issues, eventually show up for what they assume will be a fun, stress-free little getaway.
.
But none of them happened to see what's already happened to Jeanette's boyfriend Eddie (Michael Picardi), who was driving up separately, crashed his car and was then immediate run over by a snow plow. The driver of the plow, decked out in ski garb so his/her identity is kept hidden and cracked goggles for convenient POV shots, eventually invades the cabin and begins to kill everybody off. But rumor has it that poor Jeff has already commited suicide, so he couldn't be the killer, right?
Take one part talky BIG CHILL-style reunion movie (it's almost all talk and paltry "character development" the first hour or so), one part cheapie slasher and one part soft-core porn (with plenty of nudity from both genders) and you've pretty much got this horribly edited and badly-paced effort that one character adequtely sums up when he states, "The only time you watch the screen is if there's somebody's naked or somebody getting killed, or both." A ski pole is jammed through a neck (a pretty good effect), there's an icicle jabbed into an eyeball, a hot tub electroction and death-by-bear-trap. It's just too bad all that takes an hour to happen. After everyone else is quickly done away with, our leading lady wakes up the next morning, runs around outside wearing boots, a jacket and panties (!) discovering dead bodies and then gets her hand on a gun, which comes in handy taking on the surprise killer, who isn't even a surprise since the person's identity is horribly telegraphed well in advance during a clumsy flashback sequence.
The actors range from decent to awful. Best of the lot is Loring, the now-grown Wednesday from The Addams Family TV series (1964-1968). Despite big 80s hair, she's pretty, has more natural dialogue delivery than the rest of the cast and handles the majority of the female nudity. It's too bad she didn't have a bigger career as a Scream Queen (though she also appeared in the 1986 film BLOOD FRENZY) because that would have been a good career path for her. Loring also seems to have led a pretty interesting life away from movies. She was married at 15, had a daughter at 16 and was divorced soon after. Her second husband was Doug Stevenson, the star of this film. After they split up, she married porn actor Jerry Butler, appeared in non-sexual roles in a few adult features (and even wrote one!), did the talk show circuit to discuss her drug problems, divorced Butler, turned her life around, went to work doing public relations for a hotel chain and now works as a caterer while appearing at film conventions across the country. I'd actually like to see her make a return to horror films some day.
★1/2
Posted by The Bloody Pit of Horror at 3:25 AM