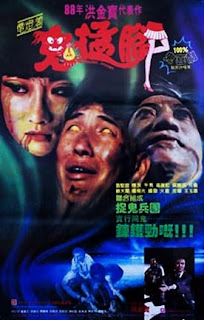 ...aka: Haunted Island, The
...aka: Spooky Spooky
Directed by:
Sammo Hung
Wei Don Lo
A man is put in a wicker cage and, before being tossed into a lake and drowning, vows to come back to haunt all those involved in his death. Many years later, people who swim in the same lake are turning up dead, starting with a female swimmer out late at night in an obviously JAWS-inspired scene. Wang Hsiao-Ming (Alfred Cheung) is the weak-stomached new police officer who has the misfortune of patrolling the West Bay area where the killings are taking place. When the first victim's body washes up on shore, he visits white-haired mortician Dr. Queency (Fat Chung) to get the scoop about what happened and finds out that not only was the woman murdered but the lake area where she was killed is rumored to be "nixed" (is that kinda like hexed?)... Wang also has problems with both the village chief (who doesn't want Wang to cause a stir and drive away business), his hot-headed, stubborn boss and the arrival of a new female police sergeant Pai (Joyce Godenzi), who is one tough cookie. During a teenage beach party, a chubby kid named "Fatty" is killed, and another woman is possessed by the spirit of the murdered man's lover; spurring our heroes into action. They take a boat out to sea, retrieve the corpse of the drowned man and retreat to another more-populated police station where all hell break loose when the corpse comes to life as a super-strong, nearly-unstoppable zombie.

Other than ghosts, multiple possessions and a zombie, this throws in references to everything from JAWS to THE THING to BACK TO THE FUTURE to GHOSTBUSTERS to THE EVIL DEAD, without the annoying habit recent movies have of blatantly pointing all this out through irritating know-it-all characters. There's even a funny bit strangely predating the comic disembodied hand scenes from the sequel to EVIL DEAD, which was filmed a year after this one. The first half is slow but still pretty amusing, but the second half picks up the pace in a big way, has plenty of fast-paced (sometimes slapstick) action, gore, special effects, people being thrown around all over the place and other entertaining stuff. It's quite a bit of fun, with some off-the-wall humor, witty one-liners, a spirited cast and characters who are hard to get a handle on at first, but soon become oddly endearing. It's too bad this is a bit difficult to find here in America. My one major gripe (which is certainly not the filmmakers fault) was the quality of the print (a little blurry) and how the subtitles were done (white print over many bright scenes or white backgrounds, which made them difficult to see). Hopefully a major label will pick it up, do a remaster and distribute this title some day so more people can see it.

Actor/director Sammo Hung, who gets to play the resurrected zombie in this one, also made the horror-comedy ENCOUNTERS OF THE SPOOKY KIND (1980), which I'll be sure to check out sometime soon.
.
★★★
Posted by The Bloody Pit of Horror at 6:07 AM