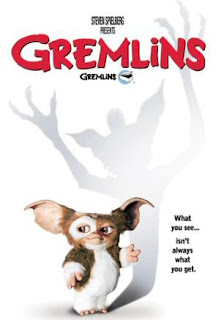 Directed by:
Joe Dante
It’s more comic horror from director Joe Dante (PIRANHA and THE HOWLING) and executive producer Steven Spielberg (JAWS, of course). Everyone who was a child of the 80s knows the plot... Fumbling inventor Rand Peltzer (Hoyt Axton) purchases a extremely cute, lovable and furry "mogwai" from Chinatown and gives it to his son Billy (Zach Galligan) as a Christmas present. When three rules (avoid bright light, don't get wet and don't feed after midnight) are ignored, the docile critter spawns vicious, evil, green, slimy, scaly monsters that terrorize and kill denizens of the picture-postcard small town right out of Norman Rockwell. Phoebe Cates is a bank employee who tells a very morbid story (for a kids movie, anyway) about her dad falling down the chimney on Christmas Eve and breaking his neck to add to the holiday spirit. Axton is great fun toying around with his botched inventions and Frances Lee McCain, as his wife, is involved in some of the more memorably nasty sequences when she freaks out and kills Gremlins using a blender and a microwave oven. Polly Holliday (the sassy diner waitress Flo from the Alice TV series) is great as crotchety old bitch Mrs. Deagle and also has the best death scene. Dick Miller is hilarious as a war vet neighbor who gets run over by a snow plow.
.
Also in the stellar supporting cast are Scott Brady as the town sheriff, Keye Luke as the wise shopkeeper, Jackie Joseph (Audrey from the original LITTLE SHOP OF HORRORS) as Miller's wife, Corey Feldman (who'd just faced off against Jason in FRIDAY THE 13TH: THE FINAL CHAPTER) as a neighborhood kid, Belinda Balaski (from Dante's THE HOWLING), Glynn Turman, Judge Reinhold as a jerk bank employee, Kenneth Tobey (who is uncredited) as a gas station worker who gets one of the dad's smokeless ashtrays, as well as Spielberg and Robbie the Robot in brief cameos. Chris Walas did the excellent special effects, Jerry Goldsmith scored and Howie Mandel is the voice of Gizmo. This was a huge moneymaker, raking in over 148 million domestic gross during its initial theatrical release, and up until the mid-90s was listed as one of the top five highest-grossing horror films of all time (it's now just outside the top ten).
.
Followed by GREMLINS 2: THE NEW BATCH (1990), which was nearly as good but was a box-office disappointment, and countless low-grade imitations (GHOULIES, CRITTERS and MUNCHIES to name a few) that were mostly made for the video market. GREMLINS should, and probably will, remain a holiday classic for many of us.
★★★1/2
Posted by The Bloody Pit of Horror at 11:04 PM

Email ThisBlogThis!Share to TwitterShare to FacebookShare to Pinterest
Labels: mini-monster