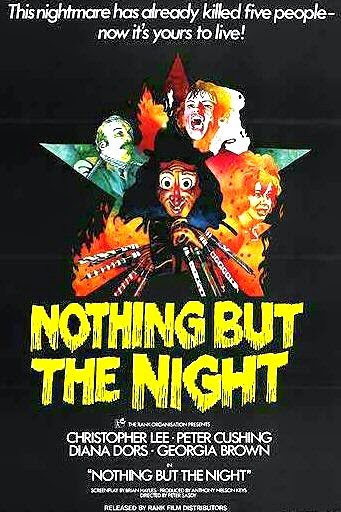 
Best known as the one and only film from producer Anthony Nelson-Keys and co-star / (uncredited) executive producer Christopher Lee's Charlemagne Productions, this project was intended to usher in a return to serious horror films, but was such a flop it single-handedly killed off the company. Despite that, and despite the fact this generally receives awful reviews, I didn't think it was bad at all. The only survivor of a fiery bus crash that killed everyone else on board, little Mary (Gwyneth Strong) is forced to remember the details of the accident via hypnosis while also getting involved in a bitter custody battle with her crazed mother Anna Harb (Diana Dors in likely her best genre performance), a former criminal and prostitute. Meanwhile, elderly trustees of an orphanage are being murdered one by one. Clues lead back to a large orphanage on a Scottish island, where a secret cult seeks immortality. Colonel Charles Bingham (Lee), pathologist Sir Mark Ashley (Peter Cushing) and a female reporter (an excellent Georgia Brown) team up to uncover and hopefully stop the evil plot. Though a bit meandering and overly complicated, the film does manage to bring it all together during a finale that brings to mind the same one in THE WICKER MAN (1973). The strong cast also includes Michael Gambon as an inspector and Keith Barron, Kathleen Byron and Duncan Lamont as doctors.

Originally released to video in the States by Monterrey under the title The Devil's Undead, but it makes the cable rounds under its original title (also the name of the John Blackburn novel from which it is based). As of this writing, the film has only received a DVD release in Japan, under the title Devil Night.