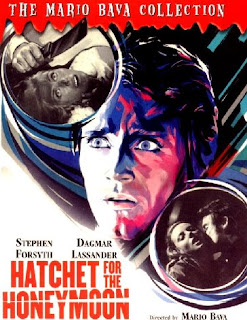 ...aka: Accetta per la luna di miele, Un
...aka: Axe For the Honeymoon, An
...aka: Blood Brides
...aka: Hacha para la luna de miel, Un
...aka: Hatchet for the Honeymoon
...aka: Red Mark of Madness, The
...aka: Red Sign of Madness, The
...aka: Red Wedding Night
Directed by:
Mario Bava
John Harrington (Stephen Forsyth) is a real sick-o who hacks up brides-to-be with a hatchet (really, what we here in America would call a meat cleaver, as opposed to a small axe). We hear John's thoughts ("The fact is, I'm completely mad!") and flashbacks reveal that John killed his own mother because his disapproved of her new boyfriend. He lives in a mansion with his older, wealthy, nagging bitch of a wife (Laura Betti), who is obsessed with the occult and returns as a nagging ghost after John decides to do away with her. The other victims (models who work for John's wedding dress company) are lured to a secret room full of mannequins. Stylish, bizarre touches, some humor, a few effective shocks and Bava's always unique and colorful direction make this rewarding viewing for Italian horror fans. However, since the killer's identity is evident from the beginning, there's little suspense and mystery to the story and the American release is, needless to say, poorly dubbed. Still, just like most of Mario's other efforts, this is well worth your time.
Red-head horror/exploit regular Dagmar Lassander has the female lead as a future bride in jeopardy and the cast also includes Jesús Puente as a police inspector, Femi Benussi, Gérard Tichy, Antonia Mas, Verónica Llimera and Alan Collins (Luciano Pigozzi).
Score: 6 out of 10
Posted by The Bloody Pit of Horror at 12:03 AM