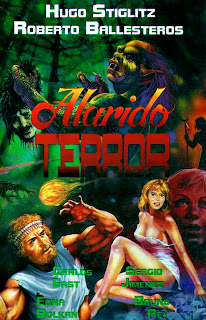 
Roberto Navarro (Hugo Stiglitz) takes his unhappy, neglected wife Laura (Azela Robinson) and little girl Gaby (Hugo's real-life squirt Sofia Stiglitz) out into the country for a relaxing picnic. Well actually he's primarily there to meet up with his wife's uncle, Carlos (Bruno Rey), and Carlos' sidekick Eladio (Rojo Grau) to look for a hidden treasure. Leaving his wife and child behind in the woods, Roberto joins the other two men in exploring a crumbling 16th Century monastery. They break down a wall with a pick axe and, finding nothing inside other than a skeleton, promptly leave. On their way out, Eladio snatches a few bone fragments and sticks them in his pocket. Immediately after leaving, everyone's chased off by an armed posse who are presumably there to protect the tomb from scavengers. A few men in the posse then go to where the wall was broken down and unwisely take some bones as souvenirs themselves. Because his tomb was raided, a big, centuries-old man-in-a-rubber-suit monster with big claws and fangs emerges to get his bones back. The creature slaughters an entire barn full of goats and quickly kills both of the posse members who stole from him, an entire family and a drunk who's outside taking a piss. 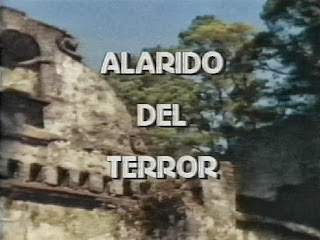 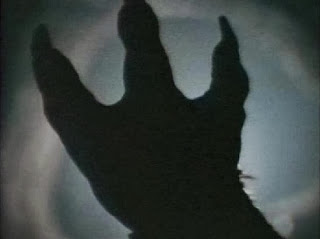 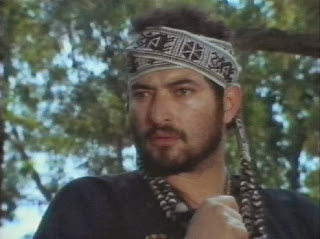 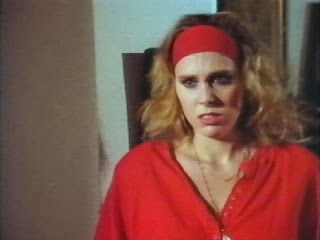 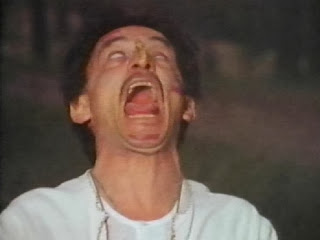 A forest-dwelling mystic named Colibri (Roberto Ballesteros), who seems to know pretty much everything about the long-dormant beast, is on the monster's trail... which isn't too difficult to follow since he leaves green slime everywhere he goes. Colibri is decked out to look like a samurai and they play pan flute music every time he appears, so you know he means business. The creature, called the "Chaneque" and played by Arturo Vencez, was a former monk named Ibar who's been cursed. Not content with simply having a monster on the loose and an easy-to-follow story line, about midway through the writers decide to ignore the set-up and make things as convoluted as humanly possible. Little Gaby is somehow linked to the creature and has been having problems in school because of it. She doesn't socialize much with the other kids, scares them with macabre stories and draws creepy pictures. The fact her parents hate each other doesn't help matters and leaves her more susceptible to possession. Colibri (who can telepathically communicate with the young girl) shows up to give Gaby a magic amulet to protect herself, but mum immediately tosses it in the garbage for no good reason. Chaneque then shows up. He makes knives fly out of a drawer, slaughters their dog and and makes Gaby levitate off the ground and spin around in circles. She vanishes and then starts whining for her parents in an echo voice exactly like Heather O'Rourke's after she's been sucked into the TV in Poltergeist (1982). 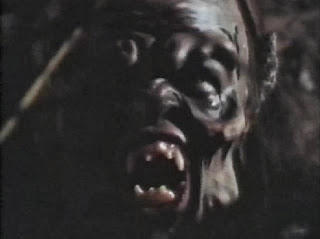 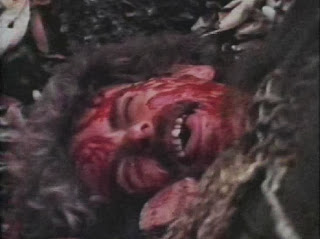 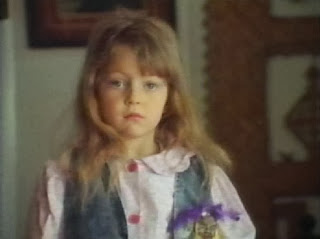 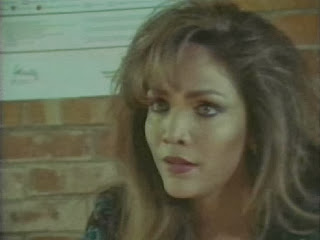 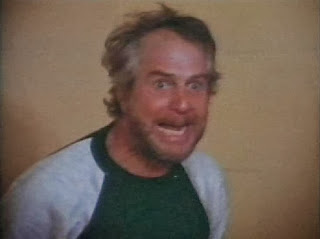 Alarido del terror develops an extremely confused mythology for its creature that seems to change from scene to scene. The idea that Chaneque just wants his bones back is dropped after 20 minutes when the monster suddenly stops caring. An elder mystic Colibri goes to visit says the monk's skeleton needs to be destroyed to stop the curse but nothing of the sort ever happens. The monster is also described as a primitive spirit looking for a means to enter our world who needs to possess someone to accomplish this. No one is ever possessed and, as far as evidenced in this movie, the creature has always been lurking in the monastery ruins and clearly has no issue existing in our reality since it kills about a dozen people there! And then we learn the monster lurks in a parallel universe to ours. A couple of characters even go there at the very end through a portal that miraculously opens up in a bedroom wall. There, they face reanimated vines, quicksand, tarantulas, the monster taking on the appearance of other people (including Roberto's dead mom a la The Exorcist) and other "horrors." 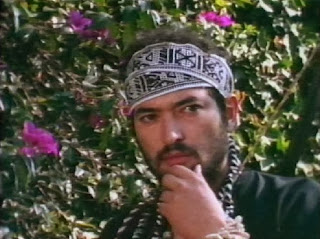 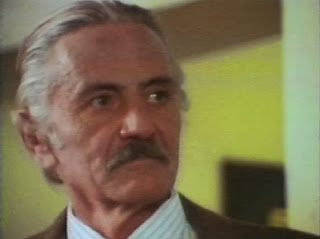 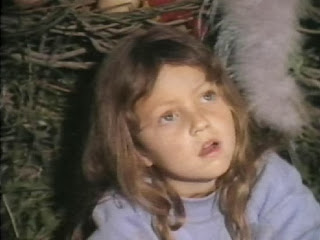 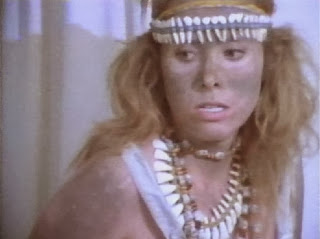 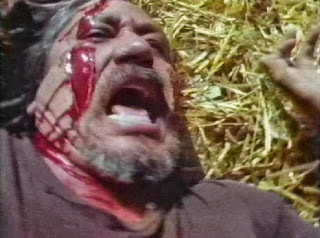 Aside from numerous American movies this rips off (especially - of all things - the lousy Charles Band production Troll), there's also an obvious and strange Asian influence at work here. The Colibri character, a scene where Stiglitz has a bunch of fireballs heaved at him and the complicated magic elements all instantly bring to mind Asian genre films of the 70s and 80s. The creature is said to be a gluttonous beast who loves wheat and sugar and things of beauty, so our heroes must make a large offering, cover themselves in mud and sea shells and then call the beast forward by blowing into a conch. Once the portal opens a pot of incense must be kept burning or else the portal will close and those who enter it will be trapped for all eternity. As needlessly complicated, confusing and dumb as all this all is, the film does have an enjoyably zany vibe to it. Stiglitz's character - who's usually beet red from screaming and arguing so much - is so unlikable it's almost impossible to root for him, though I guess he does learn not to be such a douche by the end. There's also a hilarious moment when the usually-conservatively-dressed wife character has to go to an important meeting at her daughter's elementary school and suddenly decides that's the appropriate time to dress like a streetwalker in a skimpy all-leather outfit. 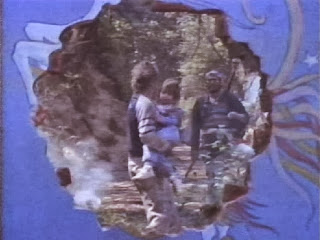 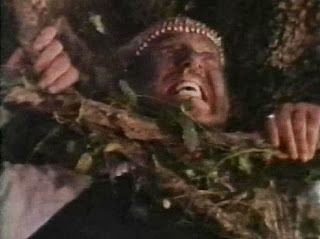 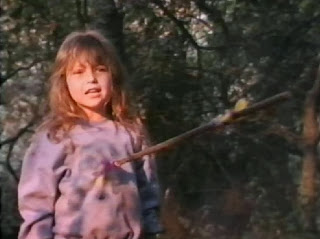 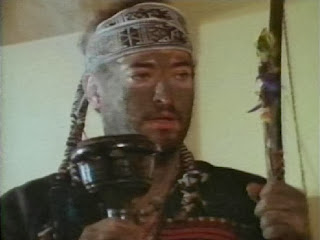 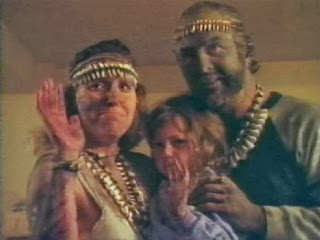 René III, grandson of René and son of René Jr. (both of whom were responsible for their fair share of schlock through the years), does the family proud with this one. He also was associate producer (along with Stiglitz) and co-wrote it. Veteran Mexi character actor Carlos East shows up in one scene as a detective, as does the pretty Edna Bolkan (from Cemetery of Terror) as a school psychologist. Filmed in 1989 but not released  until 1991, this was first issued in Mexico on the Video Alfa label. The only known American distributor (Million Dollar Video Corp.) carried just the un-subbed Spanish-language version.

Hi. I'm really glad to have found your blog.
I was wondering if by any chance you have the video file to download?
I'd really appreciate it :3

Thanks but, sorry, I don't have a video file for this one.

I have the original master tape to this. It was filmed for TV originally and my friends father worked on it and was given the networks master whichbhe in turn fave to me when he found out I liked weird horror films.

Not sure if any DVD companies would be interested in releasing this one or not but if so they would probably want to borrow your copy. I'm assuming this never played theatrically.