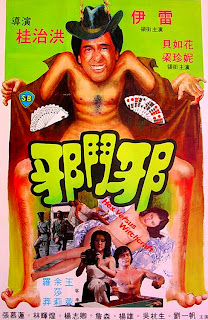 
HEX (1980), from the same director, was basically a rip-off of LES DIABOLIQUES with a supernatural bent. This follow-up is completely unrelated and completely different in tone. It's a ghost comedy. Cai Tou (James Yi Lui) has the very bad combination of a gambling addiction and terrible luck. He seems to lose at every game he plays: cards, mahjong, you name it. He even loses big to a street hustler playing a simple game of "Say 'yes' to every question I ask." And, of course, he's losing a lot of money in the process. Having already pawned nearly everything he owns (except his wife, he jokes), he's broke. At a domino game, Cai Tou steals 100 bucks off a woman and loses it in a match. He's busted and brought before Brother Nine (Chan Shen), who owns the parlor. Already indebted to him for a significant amount of money, Brother Nine tells Cai Tou if that he can get his wife (Jenny Leung) to sleep with him he'll forgive his debt. Cai Tou agrees and borrows 200 bucks off of him to help loosen his old lady up. On her birthday, Cai Tou takes her out, plies her with drinks and rents a hotel room but everything backfires and Brother Nine ends up losing his testicles after wifey pushes a table into his crotch.

Brother Nine has his thugs beat Cai Tou up, then gives him three options, which involve either them killing him, him killing himself or them cutting off his dick. His wife leaves him and plans to start divorce proceedings immediately, so Cai Tou decides to hang himself. Unfortunately, he chooses a public park to do so at and ends up going to the police station for breaking a branch off one of the trees. An attempt to eat rat poison backfires when he's given a package of ecstasy pills instead and goes streaking. Back to the jail he goes. Once he's out, he attempts to jump off a balcony but bounces off a truck onto a mattress. It's there that he spots something shimmering in the sunlight. Why, it's a duffle bag full of gold and jade jewelry. Good luck at last! Not quite.

Liu San (Chi Hing Yeung), an elderly man, comes knocking on his door and has a snapshot of Cai Tou with the bag in hand. He says Cai Tou can keep the bag and promises to put him up in an expensive flat and give him plenty of money if only he'll do just one little favor for him: marry his daughter, Ah Cui. The catch? Ah Cui is dead. Murdered by gangsters while trying to sneak across the border, Ah Cui's spirit wanders around restlessly and her father doesn't want his poor girl to be lonely. Liu San warns Cai Tou beforehand that his daughter isn't perfect, though. In fact, she's hot-tempered, jealous and knows Judo. She's also so lazy he has to install a Clapper in their bedroom. Cai Tou goes through with the marriage thinking it's all a sham. It isn't until he tries to go on a date with another woman - whom Ah Cui promptly possesses - that he starts to believe it. Trying to make amends, he cooks his new ghost bride her favorite meal (Ramen noodles with fried eggs), but she just dumps it over his head.

Cai Tou gets fed up and tries to get help. An acquaintance of his hires a psychic to call forth the ghost so he can speak to her, but it turns out to be a scam. Our luckless hero then goes to see a street-corner clairvoyant who calls himself The Great Spiritual Master, who comes over to the home to perform an exorcism but decides against it because the ghost runs the home. Ah Cui possesses the sexy air hostess (Yue Fa Booi) who lives next door so she and Cai Tou can have sex. Now she wants sex all of the time, which would be fine for him if she kept using the stewardess as a host body, but instead she decides o inhabit a dumpy old cleaning lady and a cross-eyed male painter and wants sex then. Despite the issues, the relationship does have its perks, such as the spirit helping to fend off Brother Nine and two of his thugs who show up wanting to castrate Cai Tou with a machete, and helping him win a climactic gambling match against a skilled opponent (played by Shirley Yu) with other-worldly abilities of her own.

With Hex vs. Witchcraft, I got something I wasn't expecting at all, but that turned out to be a good thing in this case. While the original was an average, derivative supernatural horror film, this one's an above average supernatural comedy. It's entertaining, often very clever, acted with gusto and has many hilarious moments. I was particularly fond of the Johnson's Baby Powder dance. Also interesting to point out, if this were a Hollywood movie the filmmakers certainly would have shoved some heavy-handed moral message down our throats at the end to ensure the main character learned some kind of valuable lesson from all he has gone through. Not so much here. Cai Tou is who is he. He's no angel and never will be, but that ultimately makes him more believable and even more endearing.

HEX AFTER HEX (1982), which is a genuine sequel and picks up where this one leaves off, followed. Celestial Pictures distributed this - and many other Shaw Bros. titles - on DVD.