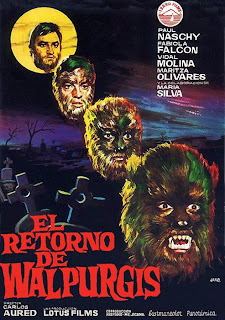 Because of witchcraft running rampant in his village (leading to the death of a bishop and nuns becoming consumed and maddened with lust), Irenius Daninsky (Paul Naschy) decides to put a stop to those he feels are responsible for the sudden outbreak in Satanism. A not-very-well executed fight that begins on horseback with a mace and battle axe and ends on foot with swords follows. Irenius comes out on top, killing the man he feels most responsible. The victim turns out to be the husband of Countess Elizabeth Bathory (María Silva), and she and her handmaidens decide to invoke Satan to avenge the death. Before they can, Irenius and his soldiers burst in and seize the ladies. The next day, the maidens are all hung off a bridge, and Elizabeth is burned at the stake. Before she dies, she places a curse on Irenius and all of his descendants. While this prologue is pretty cool and everything, it turns out to not really have anything to do with the rest of the movie. 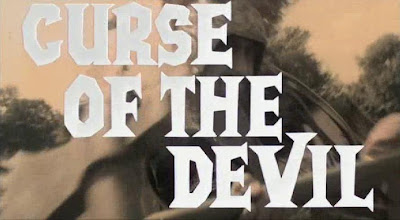 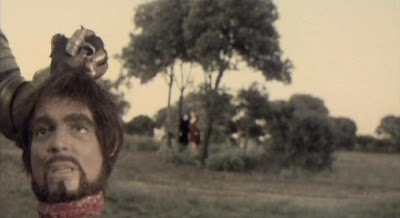 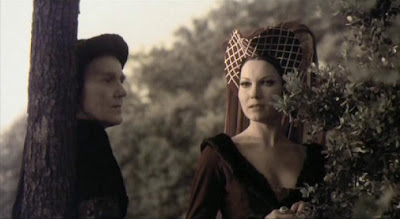 Years later, Irenius' lonely son Waldemar (Naschy again), who lives in a large castle in a small village isolated by the Carpathian Mountains with his maid Malitza (Ana Farra), is out hunting with a friend, Bela ("Joe Martin" / José Manuel Martín). Bela takes a shot at a "wolverine" (wolf) with a silver bullet right as the animal goes out of view. As they look behind some brush, they discover the corpse of a naked man with a bullet hole in his chest. Feeling responsible, Waldemar offers financial compensation to the dead man's gypsy family. They refuse and then head back to a cave where the matriarch of the clan (Elsa Zabala) conjures up a man dressed in all black, who has sex with one of the women but selects another, the wide-eyed Ilona (Inés Morales), to pass on a curse to Waldemar. (And herein lies the redundancy of the opening sequence. After all, this is a werewolf movie, and the second curse is the one that causes our hero to sport fangs and fur and start howling at the moon. So in essence we have one curse leading to another curse, when only the second really has anything to do with the plot.) 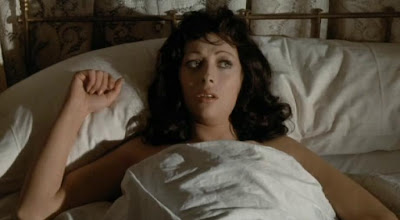 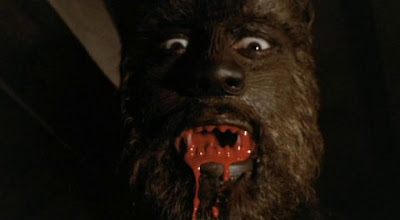 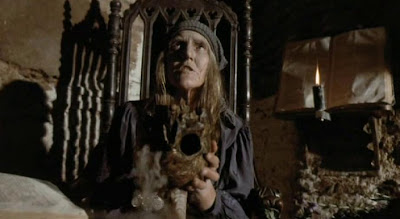 Ilona weasels her way into the home, Waldemar falls in love with her and then while he's sleeping one night, she uses a wolf skull to puncture his chest. Ilona flees into the woods but crosses paths with an escaped serial killer Janos Vilaya (yes, there's one of those in here too!) who promptly chops her up with an axe. A fevered Waldemar then has hallucinations for a day, but recovers quickly and fully from his injury. Laszlo Wilowa (Eduardo Calvo), a Hungarian mining engineer, moves to the village for a year-long stay to survey the area. He brings along his blind wife Irina (Pilar Vela) and two daughters; Kinga ("Faye Falcon" / Fabiola Falcón) and Maria ("Mary Oliver" / Maritza Olivares). Kinga and Waldemar instantly hit it off and fall in love. Maria is jealous of big sis and decides to try to seduce Waldemar. Unfortunately for her, she picks the wrong place (where the escaped psycho is hiding out) and wrong time (a full moon) to get Waldemar all alone to inform him "I came here a virgin. I'm not going to leave that way!" Blood is certainly spilled, but not the kind Maria probably hoped for as Walemar kills the psycho and then transforms into a werewolf and kills her, too. Malitza the maid, who has a motherly affection toward Waldemar, helps to hide all of the bodies. 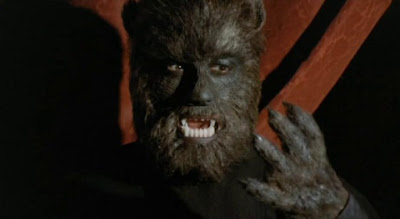 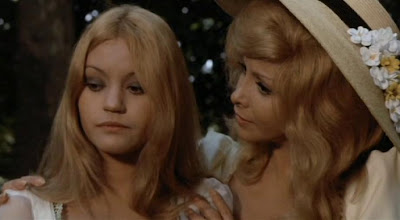 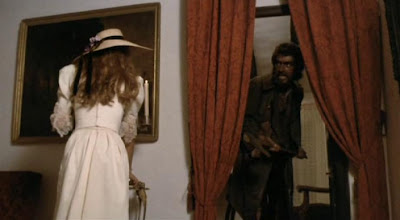 Meanwhile, Police Inspector Roulka ("Vinc Molina" / Mariano Vidal Molina) is on the case and attributes the sudden rash of brutal murders to the psycho... that is, until a couple of children discover his rotting corpse. The villagers organize an armed, torch-carrying posse to hunt down the beast, but it proves useless. Only a woman who loves Waldemar can put an end to the killings by driving a silver dagger into his heart. 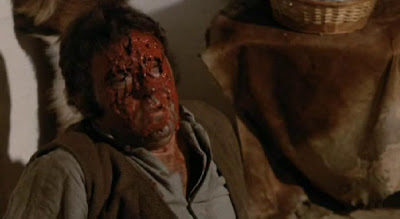 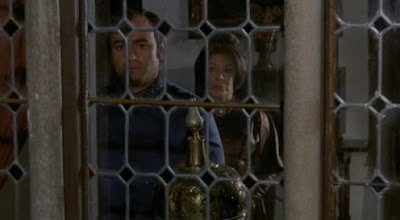 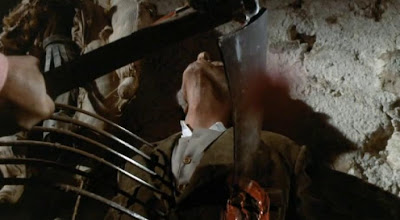 Naschy (who also wrote this under the name "Jack Moll") gets to do a lot of his usual brooding (his werewolf has clearly been heavily influenced - in both appearance and tortured demeanor - by Lon Chaney Jr.'s Larry Tablot) and there's a high body count, lots of werewolf action, some gore and some nudity. One of my favorite scenes finds Waldemar attacking and killing an acting troupe and as he runs toward them, all you can see are a pair of white eyes and fangs bouncing around in the darkness. Because of the period setting, art direction and costumes, and the lovely outdoor background scenery (bubbling brooks, waterfalls, moss-covered rocks, old stone bridges), the whole thing has this nice fairy tale feel to it. 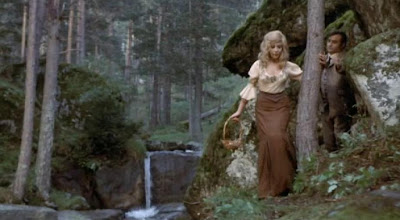 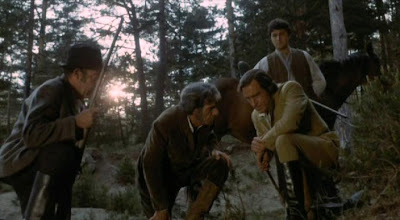 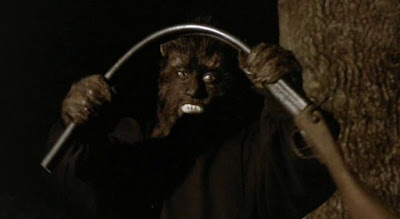 Other entries in Naschy's werewolf series include the misleadingly titled (in the United States, anyway) international hit FRANKENSTEIN'S BLOODY TERROR (1968; aka Mark of the Wolfman), NIGHTS OF THE WEREWOLF (1968; the only entry in the series that seems to be a 'lost' film and may have never actually been made, though Naschy himself claims it was), ASSIGNMENT TERROR (1969), FURY OF THE WOLFMAN (1970), THE WEREWOLF VS. THE VAMPIRE WOMAN (1970), DR. JEKYLL AND THE WOLFMAN (1971), NIGHT OF THE HOWLING BEAST (1975; facing off against a Yeti), THE CRAVING (1980; facing off against Elisabeth Bathory), THE BEAST AND THE MAGIC SWORD (1983), LYCANTROPUS: THE MOONLIGHT MURDERS (1996) and the American production TOMB OF THE WEREWOLF (2003). Naschy scripted almost every single one of those, directed two of them and produced one. 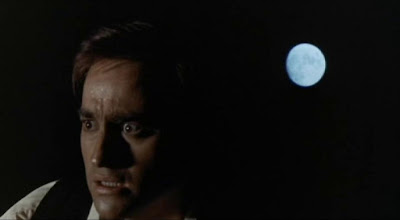 The film had been issued on VHS by Dark Dreams, United and others, and a restored and uncut 81-minute print has been released by several companies; Anchor Bay and Deimos to name a few.

Oh boy! I haven't seen this one, but I just love Naschy's screenplays. It's like he thinks, "Why settle on one plot when I can give them a dozen?!" I think Assignment Terror was even crazier than this one yet, though.

I've seen quite a few Naschy films but strangely haven't seen many of his werewolf ones! I plan of re-watching Werewolf vs. the Vampire Woman again and moving my way up from there at some point.