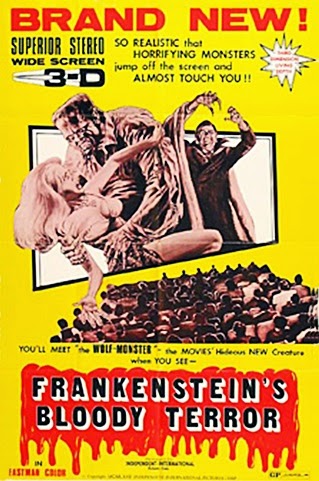 
There are several versions of this one floating around. The version I saw is the English-language release from Independent International (titled Frankenstein's Bloody Terror), which boasts being filmed in "Chill-O-Rama" and has some great opening credits with cartoon drawings of Frankenstein and "Wolfstein," as well as an explanation (bullshit) as to why "Frankenstein" is even used in the misleading title. The names in the credits have also been Anglacized; the director, for instance, is listed as Henry L. Egan. I've seen this version usually listed as running 75-78 minutes. It's supposedly missing around 15 minutes of footage. However, the 2007 Shriek Show DVD release has restored much of the previously missing footage and runs 91-minutes; just two minutes shy of what the complete version (the German release The Vampire of Dr. Dracula) supposedly runs. At a costume party, 18-year-old Janice von Aarenberg ("Diana Zura"/ Dyanik Zurakowska), who's been away at boarding school in Switzerland, meets mysterious stranger Waldemar Daninsky (Paul Naschy, who also scriped under his real name Jacinto Molina). Waldemar has a reputation as being weird and intense, yet is respected by the townspeople, though Janice's father Sigmund (José Nieto) doesn't much like her talking to him. And neither does her handsome potential suitor Rudolph Weissman ("Michael Manza"/ Manuel Manzaneque). While exploring the ruins of an ancient monestary, Waldemar tells Janice and Rudolph about the history of the place. Rumor has it, a werewolf descendant of the Wolfstein family is buried somewhere on the grounds... and someone forgot to put it down with a silver bullet. Uh oh.


Traveling gypsies Janos ("Gilbert Granger" / Gualberto Galbán) and Nascha ("Rosemarie Winters"/ Rosanna Yanni) decide to crash in the Wolfstein castle for the night. They make a fire, find a wine cabinet, get drunk and then decide to explore the family tomb. While raiding the coffins of their valuables, they make the mistake of removing a silver dagger from one of the bodies, effectively bringing the long dead werewolf count to life. He kills them and then escapes into the woods. Soon after, wolf attacks are being reported in the area. A posse of hunters and dogs is organized to take down the beast. Waldemar is bitten when he jumps in to save Rudolph's life, and then goes on to carry the wolf curse himself. The werewolf design is naturally dated and very old-school (the film also employs time-lapse transformation techniques) but, as played by Naschy, it's an interesting athletic creature that pounces on victims and seems to be throwing punches when he claws people. While tortured Waldemar sulks around the Wolfstein Castle feeling hopeless, his new friends Janice (who has fallen in love with him) and Rudolph (who has accepted the fact he's just lost his girl) find help. Or so they think.


Feigning being experts in lycanthropy, Dr. Mikhelov (Julián Ugarte) and his sultry wife Vanessa ("Anita Avery"/ Aurora de Alba) show up to the castle, but have things in mind other than trying to help out. What? I'm not really sure, but they're actually vampires who start feasting on their young hosts. They keep Waldemar chained up the entire time and re-resurrect the Wolfstein werewolf. It's never really explained what the two plan to accomplish. Both Janice and Rudolph's fathers make it to the castle just in time to watch Waldemar break free and take on Wolfstein werewolfo e werewolfo and drive a well-deserve stake into Vanessa's heart. But Dr. Mikhelov has taken his new vampire bride Janice away. And since only a person who loves a werewolf can kill them, Janice is needed to take down Waldemar. But who's going to take down Dr. Mikhelov? Is this starting to get needlessly confusing all of a sudden, or what?


Though the storyline is a mixture of the all-too-familiar and the all-too-confusing, the motives are muddled and the pacing somewhat off, the film is beautifully photographed and very colorful, with vivid Bava-like lighting and good Gothic shooting locations. And it's a good thing it at least has that much going for it because otherwise our very first look at Waldemar Daninsky (a Spanish/ West German co-production) is pretty much a musty, though still mildly watchable, non-event. Regardless, it was an international hit during its day (including playing a popular double here in the U.S. and becoming a "creature features" late night TV staple in the 70s), made Naschy a top Euro horror star and was followed by over a dozen (!) sequels and spin-offs. The cast also includes Spanish horror regulars Ángel Menéndez, Antonio Jiménez Escribano, Beatriz Savón and Antonio Orengo.

The immediate follow-up was the French effort Nights of the Wolf Man (1968), which is missing; it was either never completed or never even filmed. Naschy himself is actually the only person to vouch for its existence. Others in the Naschy/Waldemar werewolf series that actually are available include ASSIGNMENT TERROR (1970), THE WEREWOLF VS. THE VAMPIRE WOMAN (1971), Fury of the Wolfman (1971), Dr. Jekyll and the Werewolf (1972), CURSE OF THE DEVIL (1973), NIGHT OF THE HOWLING BEAST (1975), THE CRAVING (1981), The Beast and the Magic Sword (1983), HOWL OF THE DEVIL (1987), Lycanthropus: The Moonlight Murders (1996) and TOMB OF THE WEREWOLF (2004).

The Shriek Show DVD (which is the first official home format release of the film here in the States) is a must for Naschy fans and includes the documentary short "Interview with a Werewolf" (a 28-minute interview with the actor), a commentary track from Sam Sherman (where he explains the origins of the U.S. title and goes into great detail about failed plans for a 3D release), rare trailers, radio spots and deleted scenes. As is actually the case with many of these films, the supplements are more interesting than the actual film.

Ah, yes. The curse of Wolfstein! I met Naschy at a convention years ago and even he was at a loss to explain the US title except that maybe the Frankenstein name was considered more marketable. I'm glad this got a decent DVD release finally. Great review!

From what I've heard, American distributor Independent International promised someone a "Frankenstein" film, so instead of actually making one they simply bought the rights to this, retitled it and added new credits! I bet audiences were like "WTF?!" That's cool you met Naschy! Did he have anything else interesting to say?

Naschy was pretty interesting despite the fact that he spoke no English!He was very honest about his career and the troubles he had trying to be a horror star in Spain (especially under the Franco regime!).