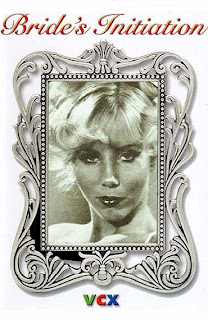 ...aka: Dracula and the Dirty Old Witch

THE BRIDE'S INITIATION was a 67-minute porno that mixed X-rated sex (though apparently not very much, according to iafd), some light S&M and brain-dead vampire humor. Thankfully for those of us not really wanting to slog through an entire early 70s adult feature (I personally have no problem with doing so if it's something like THE DEVIL IN MISS JONES or THROUGH THE LOOKING GLASS, but let's face it - those are atypically good for the genre), Something Weird offers the film in a condensed form as an extra on their DRACULA THE DIRTY OLD MAN / GUESS WHAT HAPPENED TO COUNT DRACULA? DVD. The SW version (under the new title DRACULA AND THE DIRTY OLD WITCH), runs just 22-minutes (which is about all I could personally stand) and has all the hardcore sex removed. What remains is unsexy, unfunny and basically boring, but hey, I'm just thankful I got to save 40+ minutes viewing this - so kudos to SW for helping me out there.
.
Count Dracula (Marc Brock) wakes up nude in his coffin - except for his cape, plastic fangs and one of the worst undead make-up jobs ever seen - and goes to tend to a cheap S&M dungeon set consisting of black walls, a yellow mattress in the middle of the floor and three nude women chained to the wall. A cackling, facially-scarred witch complete with a long, warty nose makes some special "brew" from human, uh, juices, for the vampire to drink. His pock-marked chauffeur named James ("Jack O'Brien"/Jack Birch) helps kidnap a newlywed couple (the woman is raped and the guy is castrated off-screen), as well as a maid and a police detective. Dracula eventually falls in love with a buck-toothed blonde named Miss Richman (Carol Connors), who he thinks can end his eternal suffering. He gives her a magical ring that he uses to hypnotize her and lure her to his lair, and the witch eventually spikes his special potion, which causes the vampire to change his sexual preference. The end.
.
Most of the cast returned in the adult feature COUSIN BETTY, which was filmed back-to-back with this one. The SW DVD also contains a condensed, non-explicit cut of the John Holmes vehicle SEX AND THE SINGLE VAMPIRE (1970).
.
★
Posted by The Bloody Pit of Horror at 2:53 AM