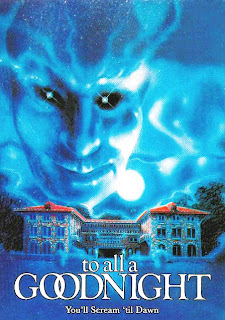 Krug from THE LAST HOUSE ON THE LEFT (David Hess) made this obscure slasher movie with a script from the star of THE INCREDIBLE MELTING MAN (Alex Rebar). The night scenes are so darkly photographed that you can't tell what the hell is going on half the time, which could cause some alarm if the daylight scenes were any good, but since everything is equally stupid, blame whoever, in front of or behind the camera, you want. Jennifer Runyon is a sweet, milk-drinking, baby-voiced blonde virgin named Nancy, who is stuck at a boarding school with her obnoxious and lascivious female friends. When their boyfriends fly in for a sex-filled Holiday weekend, a nut dressed like Santa Claus prowls around and kills most of them off. It might have something to do with an incident that occurred years earlier (cue flashback) when a sorority girl died after taking a tumble off a balcony. Victims are killed with arrow, knife, axe, rock, airplane propeller and various other sharp things, most of the women (except the leading lady) get naked and a decapitated head hangs in the shower. One girl does a cop who comes over to help them. The cop is played by Hess (who appears uncredited). This film wraps with a twist ending that's as funny as it is pathetic and desperate.
Forgettable as it all is, TO ALL A GOOD NIGHT is noteworthy as one of three killer Santa Claus movies to predate SILENT NIGHT DEADLY NIGHT (1984). The other two (much better) films are TALES FROM THE CRYPT (1972; the segment "And All Through the House") and CHRISTMAS EVIL (1980; aka YOU BETTER WATCH OUT).
★
Posted by The Bloody Pit of Horror at 10:07 PM

I seem to remember reading many many centuries ago that Hess directed a movie that featured no close-ups. I don't remember if Santa was mentioned but it's hard for me to believe he directed two movies! Could this possibly be the same movie??

According to IMDb this is his only movie as director so it could very well be this one. I never even noticed there weren't any close ups while I was watching it but that's probably because I was too busy straining my eyes to try to make out what was going on in the semi-darkness. This cinematography is amateurish and the lighting is horrible so it's likely this same movie.