Slave Girls from Beyond Infinity (1987) 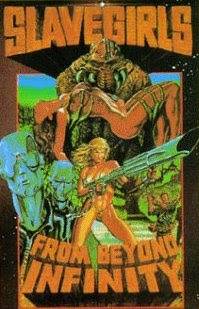 Directed by:
Ken Dixon
Energetic throwback to 1950s-style sci-fi/horror/action flicks features blonde, bikini-clad space captives Daria (ASSAULT OF THE KILLER BIMBOS star Elizabeth Kaitan, billed as "Elizabeth Cayton" here) and Tisa (Cindy Beal) escaping from their prison ship chains and ending up stranded on a desolate, sparsely populated planet. They stumble upon the castle home of a sadistic, black-clad hunter named Zed (Don Scribner) whose hidden trophy room contains animals, monsters... and humans. Eventually he sets the girls, plus Shala (Brinke Stevens), another stranded woman whose brother he has just killed, out into a mutant-infested tropical forest and hunts them down with a high-tech laser and two hulking robots. It's silly, the pacing is fairly brisk, the girls look great in and out of various skimpy outfits (and are quite often chained to castle walls to appease the slightly kinkier audience members), the sets and weapons (those laser-blasters look like something that might come with your video game system) are amusingly cheap-looking and the rubbery low-budget special effects (from John Carl Buechler) are pretty fun, making this B-grade MOST DANGEROUS GAME a decent effort for fans of B grade entertainment.

After a healthy ten+ year run in mostly low-budget films, Kaitan got married and retired from acting in the late 90s, then became a secretary for conservative activist David Horowitz. After being out of the spotlight since, she popped ten years later in the 2009 documentary HIS NAME WAS JASON. Brinke, of course, is still in the business and has amassed over 150 credits since the early 80s. Many of the space special effects (flying saucers and such) were lifted from BATTLE BEYOND THE STARS (1980) and other Roger Corman productions (I've seen the same exact fx lifted for at least two dozen other low-budget productions) and clips from that (and this) were later used in the worthless compilation BIMBO MOVIE BASH! (1997). Charles Band was the (uncredited) executive producer. Director Ken Dixon also made the very fun zombie compilation video ZOMBIETHON (1986).
★★
Posted by The Bloody Pit of Horror at 11:35 PM