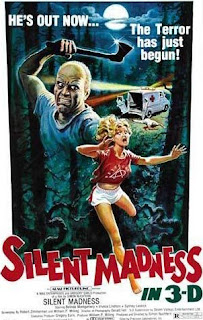 ...aka: Beautiful Screamers
...aka: Nightkillers, The
...aka: Omega Factor, The
Directed by:
Simon Nuchtern
If you watch enough horror films (particularly slasher films), you know that sometimes things can get pretty ridiculous just so the story can advance from Point A to Point B. This has several of those idiotic moments and some truly brain-dead character actions. A few morons working in a mental hospital debate whether to let obviously still-psychotic former killer Howard Johns (played by Solly Marx) loose because of "overcrowding." Female doctor Joan Gilmore (Belinda J. Montgomery) stops them, but alas he's accidentally set free anyway after his name gets mixed up with someone elses! So off he goes to a college campus, where he immediately starts slaughtering as many screaming sorority girls as he can get his hands on. Meanwhile, Joan sets out to stop the carnage (going undercover as a middle-aged sorority girl!), but find she has even more problems on her hands than she originally thought. See, the corrupt hospital staff has also sent out two sleazy orderlies (who also lobotomize patients in the hospital basement!) to kill her to conceal their previous error.

If you think the plotting is ludicrous, just wait till you see the ending. Yikes. Top-billed character actors Sydney Lassick (as the sheriff) and Viveca Lindfors (sorority mother) are wasted, as is future 80s B movie starlet/Scream Queen Elizabeth Kaitan, who shows up just long enough to get her head squashed in a vice grip. Katherine Kamhi and Paul De Angelo (both of whom played counselors in SLEEPAWAY CAMP) are also in the cast. Pretty bad; the only thing notable is it originally played theaters in 3-D.
★1/2
Posted by The Bloody Pit of Horror at 7:58 PM