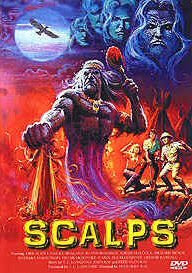 Directed by:
Fred Olen Ray
Six college archeology students decide to get a head start on their professor and (ignoring warnings from a local Indian) head up into the mountains to dig up some Indian remains. There, they accidentally unleash an evil Indian spirit. One of the male students (Richard Alan Hench) becomes possessed by the spirit of "Black Claw" and starts to kill everyone off. There's plenty of so-so, though sometimes effectively gruesome, gore effects (axe, arrow to the eye, decapitations) and a pretty tasteless bit concerning a poor girl who is raped and beaten up, has her neck slashed (with blood pouring out all over the place) and is then scalped. It's a pretty crude, grainy, badly acted and badly lit film, with highly variable and sometimes downright awful cinematography, though the rocky, desolate desert locations help to create a decent HILLS HAVE EYES style atmosphere. There are three guest stars; Kirk Alyn (TV's original Superman) as the teacher, Carroll (MARK OF THE VAMPIRE) Borland as the head of the college science department and "Famous Monsters of Filmland" magazine editor Forrest J. Ackerman as a science professor. Ray had made THE BRAIN LEECHES (1977) and THE ALIEN DEAD (1979; aka IT FELL FROM THE SKY) while still in Florida, and SCALPS (which was shot on 16mm and said to be virtually almost a remake of 1966's DEATH CURSE OF TARTU) shortly after relocating to California.
.
It was originally picked up for distribution by Continental, who released in 1983 on a double tape with THE SLAYER (1982). Apparently they also reedited it against the director's wishes, including putting in test footage that wasn't even supposed to be in the film! Retromedia (Ray's company) put out a DVD a few years back and claim it's the full uncut version. I'll try to watch it when I get the chance.
★1/2
Posted by The Bloody Pit of Horror at 8:05 PM