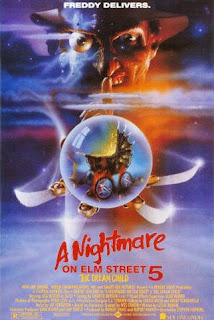 Directed by:
Stephen Hopkins
The Freddy saga was seriously starting to show his age by this point as the series took a shift in a decidedly bad direction. Part 5 is more gimmicky, more self conscious and more dependent on special effects than any previous entry. It's also drearier and more tiresome than the other four films. Lisa Wilcox reprises her role as Alice from Part 4. She's now pregnant (her boyfriend from the pervious film biting the dust early on here) and more people begin to die when Freddy (Robert Englund) starts using the dreams of her unborn child to kill off her friends. I don't know if this was intentional on the part of script writer Leslie Bohem or not, but the movie has a definite Pro Life stance; Alice learns fairly early on what Krueger is doing but decides to keep her unborn child anyway and her circle of friends end up dying because of it; getting picked off in various ghastly ways that include being turned into a motorcycle, getting force-fed to death and even getting slashed to ribbons after being sucked into a comic book world to do battle with Freddy. So basically many innocent people die because Alice is insistent on not aborting the one baby, which is a questionable story point not very well thought out by the writer of this film.

However, the special effects and production design are both very good, even though the body count is surprisingly low and one of the better dream sequences is an almost direct copy of the M.C. Escher sequence in the first HELLRAISER sequel. The story itself plays out like a lame after school special and fails to draw you in or make you care about what happens between the fx scenes. More Freddy mythology about his ghostly nun mother and his conception are added to needlessly complicate things and there's a highly annoying open ending that sets up the next sequel; FREDDY'S DEAD: THE FINAL NIGHTMARE (1991), which turned out to be even worse than this one. Sad to say The Dream Child is only worth the effort if you are a die hard fan of the series. Otherwise, you might be best off to make a trilogy out of the original, Part 3 and the clever, underrated NEW NIGHTMARE (1994), which are easily the three superior Elm Street films, and call it a night.
.
Danny Hassel (Alice's boyfriend) and Nicholas Mele (Alice's dad) return from Part 4 and the cast also includes Kelly Jo Minter, Erika Anderson, Whitby Hertford as the dream child, Beatrice Boepple as Freddy's mom, Burr DeBenning, Clarence Felder, Matt Borlenghi, Ted Nugent, Michael Bailey Smith (from the HILLS HAVE EYES remake) and Wally George as himself.
★1/2
Posted by The Bloody Pit of Horror at 12:58 AM

glossy. anemic. empty. the series had gone on too long. feels like the second of two movies shot back to back, where the first one got most of the meat. central idea's OK, it just doesn't add much in practice. FX and visuals are good, of course, but the concepts are second rate. i kinda enjoyed the first half of #4 (mostly unfinished business from #3) when i watched it again a year ago, whereas i wanted to quit DREAM CHILD after just 20 minutes.

i read skipp & spector's original first draft. it's not _wildly_ different, but smarter in some places and tighter overall. i wish they'd slowed the production cycle to fashion a stronger script, get away from the formula (DREAM WARRIORS PART 3) and build anticipation. even if they'd only brought back the scary freddy, without all the puns/jokey kills . . .

I need to watch this to finish the series on here but for some reason can't bring myself to watch this. I think Amazon Prime did me a favor when they pulled this the day I was going to attempt to watch it. lol

ha. asking for trouble, i followed DREAM CHILD with FREDDY'S DEAD on the same night. found that a much easier watch, even though its low points are subterranean.