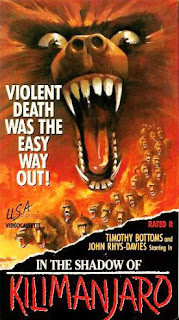 Directed by:
Raju Patel
In Kenya (where this was filmed) a drought has driven “90,000” baboons to desperate measures, leading them to attack, kill and consume human victims. Supposedly based on true incident that occured there sometime in the early 80s. The baboons are great and the attack scenes sometimes pack a gory punch, but the acting, dialogue, editing and characterization leave a lot to be desired. John Rhys-Davies and Timothy Bottoms star, along with Irene Miracle (Argento's INFERNO), Michele Carey (the daughter of Macdonald) and Calvin Jung.
★★
Posted by The Bloody Pit of Horror at 6:52 PM