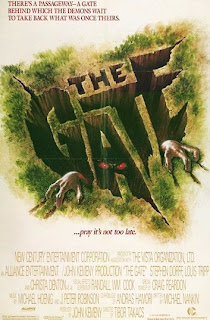 Directed by:
Tibor Takács
Excellent and imaginative stop-motion monsters are really the sole point of interest in this otherwise forgettable Canadian horror film. Curious kid Glen (a very young Stephen Dorff, in his film debut) and his nerdy buddy Terry (Louis Tripp) accidentally open the gates of hell in their suburban backyard after playing a heavy metal record backwards (groan) and reciting a demonic chant (double groan). Soon some creatures come crawling out of the ground and terrorize both of them and Dorff's babysitting teen sister Al (Christa Denton). You don't care about the stupid plot once the monsters show up, though it takes some patience to get to all the good stuff. THE GATE was an unexpected box office hit (the PG-13 rating likely helped), so the director (who also did the memorable - and much better - I, MADMAN next) got to make a sequel in 1989.
★★
Posted by The Bloody Pit of Horror at 11:22 PM