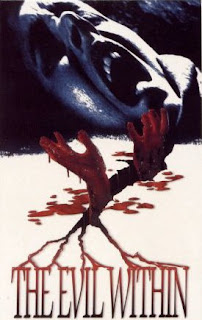 Directed by:
Alain Robak
Emmanuelle Escourrou, an unknown actress here in America who probably wouldn't past muster as a leading lady because she's gap-toothed and a very voluptuous (what most people would probably refer to as "fat" these days), stars as Yanka. Yanka works for a traveling circus and is miserable thanks to a horrible relationship with an abusive, unfaithful and controlling boyfriend (Christian Sinniger). Thankfully she manages to get away from her no-good lover, but unfortunately it takes a mutant snake-like creature to enter her between the legs and force her to flee to another city to make that happen. The parasitic monster in her womb talks to her and forces her to kill so it can drink the blood. It's basically just using her body to be reborn, but despite the situation, the two form a strange kind of bond. Lots of victims are beat to death or stabbed, and the creature informs Yanka that it's been around along as the Earth has and that one day its species will take over. Although slow going at times, this builds up to an exciting climax and if you can accept the plot, it's a pretty fascinating premise that has something to say about maternal instincts, male-female relationships, resentment about unwanted pregnancies and even evolution! It's generally well made, stylish at times, has some pretty good camerawork and there's enough nudity, blood and gory special effects to easily hold your interest.
.
The Anchor Bay DVD release is a nice quality print with two audio options. One is the original French language track with English subtitles and the other is the same English-dubbed track used in the original video release. The good news is that the dubbing is actually quite good. And as an added bonus, Gary Oldman (!) does the voice work for the creature in this version.
.
And good news for fans of this one (well, maybe): A sequel - LADY BLOOD (2008) - has been made and is awaiting distribution. There's a new director, but the leading lady is back and she even co-wrote the screenplay.
★★★
Posted by The Bloody Pit of Horror at 3:55 AM