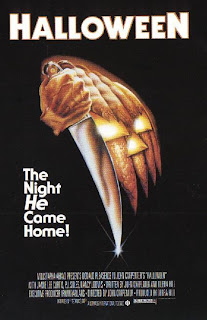 Directed by:
John Carpenter
What's actually left to be said about what is undoubtedly the most popular horror film of them all? Actually, not a whole lot, but since we've just passed by yet another All Hallow's Eve, many of us no doubt humming along to John Carpenter's now-classic score at some point, I felt compelled to do at least a brief write-up on this timeless film. And if I don't watch it I could easily find myself writing page after page going into extensive detail about the ingenious use of shot framing, the great gliding steadicam shots and the emphasis on suspense over grue, but I'm sure it's already been said before and you've already read it before. An absolute staple of the fall season; HALLOWEEN is very much deserving of its place as an iconic phenomenon, as well as its place in history as one of the great classic horror movies. It's that rare, modestly-budgeted film that gets to share a table with the original NIGHT OF THE LIVING DEAD (1968) and THE TEXAS CHAINSAW MASSACRE (1974); films that are so well-crafted and creepy, and proved to be so influential over the years, that they managed to reshape and redefine the entire genre for years to come. In fact, we're still suffering from cheapjack imitations to this day, none of which are quite able to recapture the deceptively simple magic found here. I think that part of what makes it withstand the weathering of time is that it's a downright perfect evocation of the Autumn/Halloween season. Despite being a scary film, there's still such a pleasing, nostalgic feel to the whole thing; cold wind blowing the leaves down vacant suburban streets, trick-or-treaters shuffling from door to door, Jack-O'Lanterns lining porches... It not only brings to mind everything that's great about this time or year, but also everything that's great about horror films when they're done right.
.
As nearly everyone knows by now since the story has ingrained itself in American pop culture, the story involves madman Michael Myers, who murdered his teenage sister when he was a wee lad and now, as an adult, has just escaped from a mental institution. He heads back to his hometown of Haddonfield, Illinois to stalk and then systematically murder a group of teenage girls on Halloween night. Top-billed Donald Pleasence stars as psychiatrist Dr. Sam Loomis, who's hot on Michael's trail and adequately sums up his former patient by stating, "I spent eight years trying to reach him and another seven years trying to keep him locked up." Jamie Lee Curtis solidified her scream queen status by following her appealing heroine turn here with an appearance in the sequel and starring roles in THE FOG (also by Carpenter), PROM NIGHT, TERROR TRAIN and ROAD GAMES in the early 80s. Nancy Loomis, P.J. Soles, Kyle Richards, Charles Cyphers (as the sheriff), Nancy Stephens and Nick Castle round out the cast.
.
Carpenter, who says he had no idea what a hit this was until he received a check for a million dollars in the mail, also wrote, co-produced (with Debra Hill) and composed the score. Tommy Lee Wallace (who directed the unrelated third installment) edited the film. To date, it has spawned seven sequels; HALLOWEEN II (1981), HALLOWEEN III: SEASON OF THE WITCH (1982), HALLOWEEN 4: THE RETURN OF MICHAEL MYERS (1988), HALLOWEEN 5: THE REVENGE OF MICHAEL MYERS (1989), HALLOWEEN 6: THE CURSE OF MICHAEL MYERS (1995), HALLOWEEN H20: 20 YEARS LATER (1998) and HALLOWEEN; RESURRECTION (2002), as well as a remake - Rob Zombie's HALLOWEEN (2007).
★★★★
Posted by The Bloody Pit of Horror at 2:43 PM