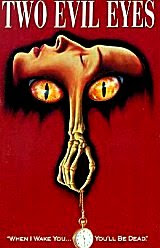 Directed by:
Dario Argento
George A. Romero
Instead of your usual trilogy or anthology, TWO EVIL EYES is two near feature-length adapted Edgar Allan Poe stories written for the screen and directed by two top horror directors. "The Facts in the Case of Mr. Valdemar" (directed and written by Romero) involves cold, calculating and money-hungry Jessica Valdemar (Adrienne Barbeau) and her greedy doctor lover Robert (Ramy Zada) teaming up to kill off her rich and elderly husband Ernest (Bingo O'Malley) for his multi-million dollar estate. The duo unwisely use hypnotism to lure their victim into catatonia, which also backfires by allowing Ernest to return from the dead and seek revenge. It's not really bad from a technical standpoint, just sort of disappointingly routine; the storyline is far too cliched in this predictable outing and there are no real surprises. However, a good central performance from Barbeau and some great Tom Savini make up FX help move it along. With E.G. Marshall, Tom Atkins as a detective and Romero's wife Christine Forrest as a nurse. For a behind-the-scenes look at the crew working on an elaborate effects scene check out the Romero documentary DOCUMENT OF THE DEAD (1989).

"The Black Cat" (directed by Argento, who also scripted with Franco Ferrini) is a big improvement over the first and reason enough to watch the movie. Harvey Keitel is in good, intense form as Roderick Usher, an alcoholic photographer who makes a living publishing photographs of mangled and dismembered corpses taken at murder sites. His latest book ("Metropolitan Horrors") stirs up lots of controversy, but his relationship with a pouty violinist is crumbling because of his cruel and controlling ways. The horror angle is added by a sinister black cat that constantly pops up in Usher's life and starts to drive him mad. This leads to several gory murders, some interesting flashbacks, bodies being bricked up behind walls and a surprise ending. Mixing elements from several Poe stories, Argento's usual visual flair (though the photography is kind of murky, there are still some nice camera shots) and fun-to-spot Poe references (including nods to The Pit and the Pendulum and Premature Burial) and lots of surprises, "The Black Cat" manages to be entertaining and also quite disturbing at times. With Kim Hunter and Martin Balsam as suspicious neighbors, Sally Kirkland as a weird barmaid, John Amos as a detective, Julie Benz and Tom Savini (who also did fx for this segment) in a cameo. Pino Dinaggio did music for both.
★★1/2
Posted by The Bloody Pit of Horror at 2:23 AM