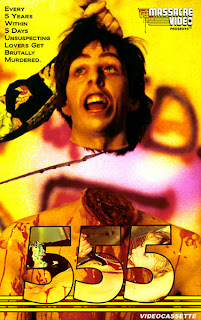 One of the original direct-to-video gore flicks, 555 pretty much typifies no budget 1980s shot-on-video product, with bad acting, even worse dialogue, a silly plot, porno-level sets, visible boom mics, techinical boo-boo's right and left and buckets of blood. As an added bonus, this throws in five topless scenes. It was made by Wally Koz and his Chicago-based, one-shot King Video Productions and was a family affair, featuring contributions from others in the Koz clan. Just scanning the credits, you'll see that Linda Koz was the associate producer, first assistant director, production manager and assistant editor, Roy Koz wrote it, was the still photographer, provided props and plays one of the victims, Sophie Koz was in charge of wardrobe, Walter Koz Sr. was the location scout and "mom" was the caterer. In addition to directing, Wally produced, edited, came up with the original idea and even provided the voice of the police captain. The VHS was (probably self-) distributed through a company called Slaughter House Entertainment. This was their only release and must have been a small one because no video store in my area even carried this title. In 2011, the film got its first official DVD release through Massacre Video. 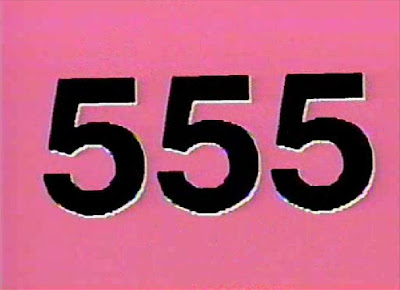 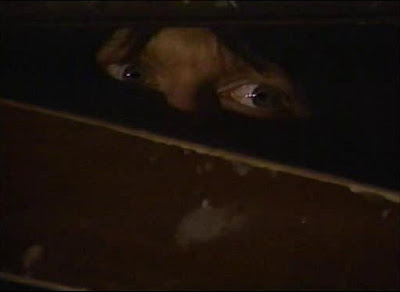 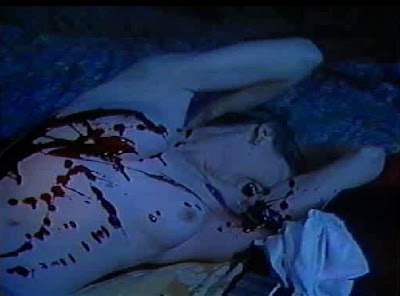 After opening credits on a gaudy pink background, a young couple are preparing to get it on at the beach at night when they're surprised by a psycho who promptly decapitates the guy and leaves his girl writhing and screaming as blood is flung onto her nude body from off-screen. Hearing the commotion, retired army colonel Peter Wayne (Charles Fuller) gets there just in time to catch a glimpse of the killer; a long-haired hippie in a flowered shirt and bell bottom jeans. At the police station, while he's filing his report, he's all but hassled by Sgt. Conner (Greg Kerouac), who is instantly suspicious of the colonel's story and quick to try to pin the blame onto him. His partner Detective Haller (B.K. Smith) and district attorney Ralph Kennedy (Greg Neilson) are also assigned the case. Everyone is annoyed by the presence of pushy female reporter Susan Rather (Mara-Lynn Bastian), who's sleeping with Ralph and not above doing whatever it takes to get the story as we will later see. 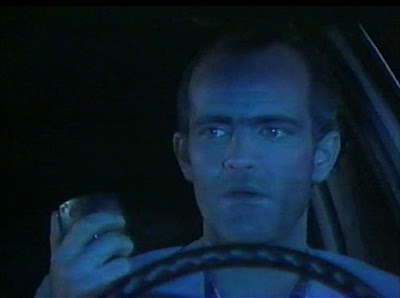 The next night a couple making it in a van are killed. A coroner's report shows that both female victims had been sexually assaulted after being tortured and killed. Since all four of the murders have occurred within close proximity of Colonel Wayne's home and a subsequent investigation uncovers a collection of swords and knives in his den, Conner is more convinced than even that he's the killed and decides to "nail that sick-o son-of-a-bitch." Before they can, the killer sneaks up on a pot-smoking couple in an abandoned "casket factory," chops off the guy's fingers and decapitates him, then stabs the woman in the back, slices up her torso and (leaving his pants on) rapes her corpse. The following evening, a guy is stabbed through the throat and his girlfriend (who is clearly laughing and simply lays in bed and covers her head up with a sheet when the killer comes after her) gets it, too. That's eight murders in four days. It all matches the m.o. of other crimes over a 20 year time period across the eastern United States. Every five years a killer has claimed ten victims over a five day time period then goes into hiding for five years before striking again. It's happened in Baltimore, Springfield, Buffalo and St. Louis... and now it's happening in Chicago. 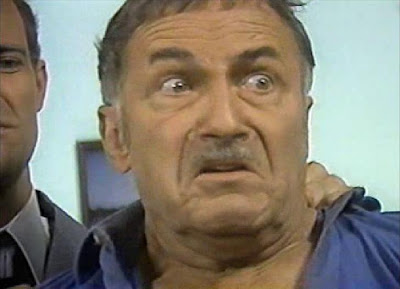 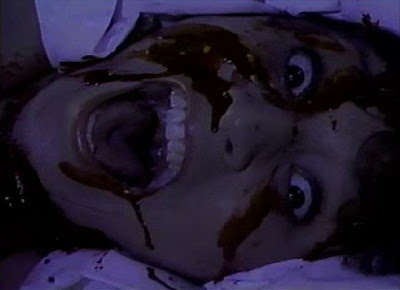 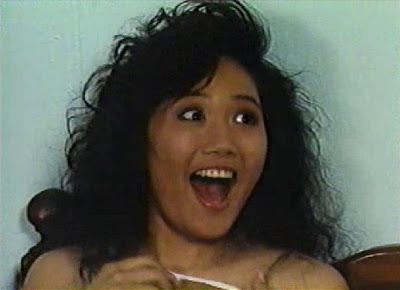 The film goes to such ridiculous lengths to make you think the killer is poor Col. Wayne (placing him at the cities on the crimes for the past fifteen years, uncovering that he was a POW subjected to physical and psychological torture, etc.) that you just know that he's not really the killer. As an added cheat, the killer is played by a completely different actor than the one eventually unveiled as the killer! At one point, reporter Susan shows up at Colonel Wayne's home, makes out with him and even lets the elderly man feel her up (!) to try to get information from him. The Colonel goes into hiding and when he's finally apprehended, Sgt. Conner - who is driven batty working on this case - tries to force him to confess to the crimes by sticking a gun in his face. But it isn't the cops who uncover the psycho, but our pesky reporter. When Conner shows skepticism on Susan's findings, she shrieks "Listen to me you stubborn Irish cocksucker!" And yes, there's even more beautifully written dialogue to be found within; such as when Sgt. Conner and Det. Haller are sitting around pondering the case...


Detective Haller
We got six victims; three male, three female, all between the ages of 18 and 25.

Sgt. Conner
They were all making love when attacked...

Detective Haller
Yeah. Do you think this guy feels this is the only way her can get a piece of ass? Bad, huh?

Sgt. Connor
They were all college students... or looked like students.

Detective Haller
Look, if this jerk is going to kill every college student looking for a piece of poontang then the colleges around this country are going to have a real attendance problem! 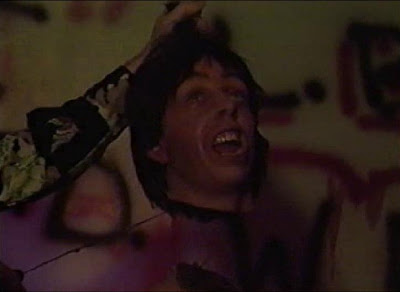 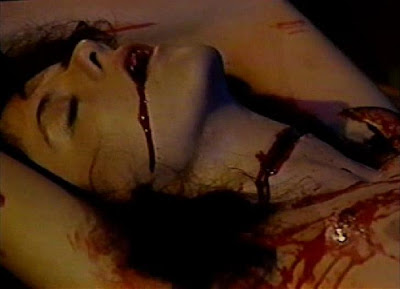 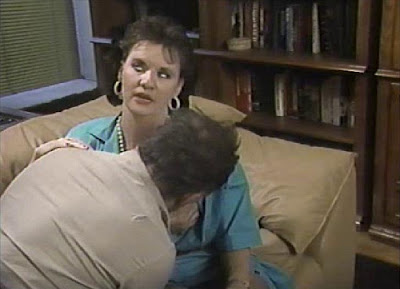 And at a crime scene, two coppers are staring at two bloody bodies under bedsheets...


Officer 1
Where do you wanna go eat after we get out of here?

Officer 2
I don't know, uh, how about some spaghetti?

Officer 1
We did that last night. What's wrong with you? Every time we see a chopped up body, you've gotta have Italian!"

Officer 2
What's wrong with you? 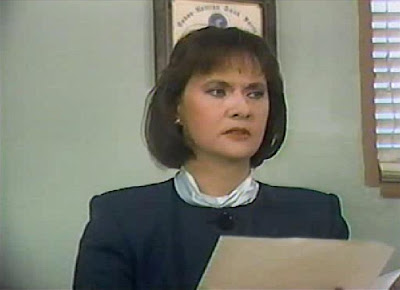 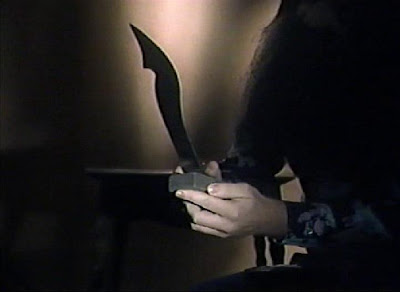 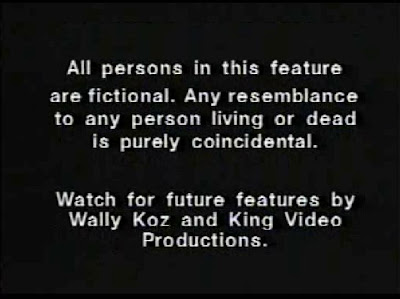 Half of this is set at the police station with the cops sitting around discussing the case. Since there was no budget, the police station is actually just a puke green room with a desk, filing cabinet and couch. Placing this in context of when it was made and comparing it directly to films of the same budget range, there's more nudity and gore than usual. The bloody fx were done by Jeffrey Lyle Segal, who at least provides one decent-looking decapitation, which the filmmakers clearly realized was the best thing going on here since they repeated it twice and decided to put it on the VHS cover. The mystery aspect is pedestrian and ridiculous, and the characters are all pretty obnoxious. The final nail in the coffin is the finale, which is about as unexciting and pat as they come.

Whoa! I used to read a lot of hype for this thing in magazines in the late '80's. Glad I never fell for it!