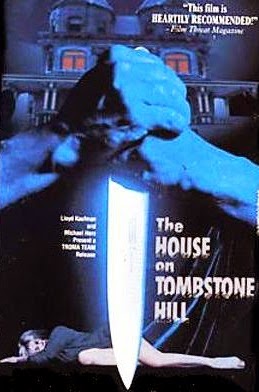 
Nasty, ghostly, murderous granny Abigail (played by a man in drag) haunts a secluded seaside house, much to the dismay of Mark (Douglas Gibson), who has just purchased it. When he and six of his friends show up to renovate the place, they all become trapped inside and are killed off one by one, some returning as zombies to help finish off the rest of the cast. Finished in 1988 (and then titled The Dead Come Home), I originally saw this film under the title The House on Tombstone Hill, which was the AIP video release title in the early 90s (1991 I believe). However, the film's reputation was tarnished over the years when Troma got hold of it and put it out in a goofy looking video box with an even goofier title (Dead Dudes in the House) to falsely make it look like a silly horror comedy. However, what worked for crappy films like A Nymphoid Barbarian in Dinosaur Hell and Fertilize the Blaspheming Bombshell was just sorely inappropriate for this more serious-minded effort, which skillfully manages to balance its derivative Evil Dead-like story line, tongue-in-cheek humor, genuinely creepy atmosphere and some good, gory shocks (provided by make-up wiz Ed French). The most memorable deaths are an impalement and a man split into two by a window.

First-time director James Riffel (who was attending NYU at the time this was made) shot this on 16mm in Cherry Valley, New York and did about a good a job as could be reasonably expected given the budget and amateur cast.