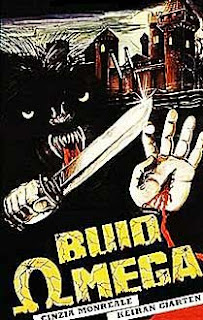 Few people know that this popular cult film is actually a pretty faithful, though much gorier and more explicit, remake of an impossible-to-find 1966 film called IL TERZO OCCHIO (aka THIRD EYE). Just figured I'd give that film its due before diving into this one. Kieran Canter is Frank Wyler, a deranged young taxidermist who resides in a beautiful Italian villa with his companion Iris (the haunting and very creepy Franca Stoppi). After Frank's girlfriend Anna (Cinzia Monreale aka Sarah Keller from Fulci's THE BEYOND) passes away, he digs up her corpse and brings her home along with an obnoxious, pot-smoking hitchhiker, where in very graphic detail he removes Anna's clothes, slices her open with a scalpel, removes her bloody organs and tosses them in a bucket before stuffing her and eating the heart. When the hitchhiker awakens and stumbles onto this, Frank pins her down and rips out all her fingernails with pliers (!) before strangling her. Iris is in love with Frank and tells him "You'd be nothing on your own!," while helping him. In one scenes she hacks up a nude body with a butcher knife while blood splashes all over her face and clothes. Frank frequently visits and talks to Anna's corpse, and likes to seduce women into the same (big) bed where his rotting amore lays. When one girl sees the body, he bites a chuck out of her neck and eats the skin while blood gushes out of her wound. Bodies are disposed of with acid or burned in an oven. Investigators, a balding guy who seems to be on to things and Anna's lookalike sister Eleanor (also played by Monreale) add extra complications.

The gore effects are pretty disgusting and convincing and this is one of D'Amato's best genre films; an entertaining stomach churner with lots of shocks and good low-budget ambience. Memorable music score by Goblin, too.