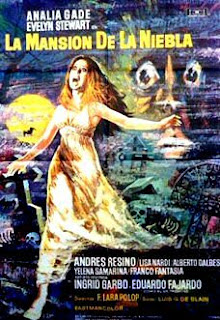 ...aka: Asesino de la niebla, El
...aka: Grito, El
...aka: Maniac Mansion
...aka: Murder Mansion, The
...aka: Quando Marta urlò dalla tomba
...aka: Scream, The
Directed by:
F. Lara Polop
Despite the questionable quality of the print viewed, this remains a stylish, fun, eerie and extremely atmospheric Italian/Spanish continental chiller. Hopefully one day we'll get an uncut, restored version of the film. Until then, even this heavily cut version is worth a look. Motorcyclist Fred (Andrés Resino), hitchhiker Laura (Annalisa Nardi), mentally unstable divorcée Elsa (Analía Gadé), perverted voyeur Mr. Porter (Franco Fantasia) and married couple The Tremont's (Eduardo Fajardo, Yelena Samarina), become stranded by a very thick fog and end up having to spend the night in a creepy mansion located right next to a graveyard. While inside, they meet the strange, beautiful Martha Clinton (Ida Galli, credited as "Evelin Stewart" here), who claims that she owns the house and says her grandmother Julie was rumored to be a vampire and witch. After everyone settles into their bedrooms, bizarre things begin to happen as a hulking, undead chauffeur and a creepy old woman lurk the grounds and Elsa begins to have flashbacks to her troubled relationships with both her father (Georges Rigaud) and her husband (Alberto Dalbés).

There's an underground catacomb that extends to crypts in the graveyard, some major plot surprises (including an eleventh-hour twist that may not sit well with some viewers) and a curious absence of exploitative elements (the print I saw from public domain vultures Brentwood Entertainment was obviously culled from a heavily-censored version omitting all of the nudity and most of the gore; thus rendering many of the cuts a little choppy). The acting, particularly the underrated Galli, is good, and the score from Marcello Giombini, photography from Guglielmo Mancori, special effects from Pablo Pérez and some great production design and sets, all contribute to making this an enjoyably creepy, old-fashioned old-dark-house diversion. Though often listed as a giallo, it doesn't really qualify as such, though I actually preferred this to many of the more popular gialli I have seen.
★★1/2
Posted by The Bloody Pit of Horror at 2:30 AM